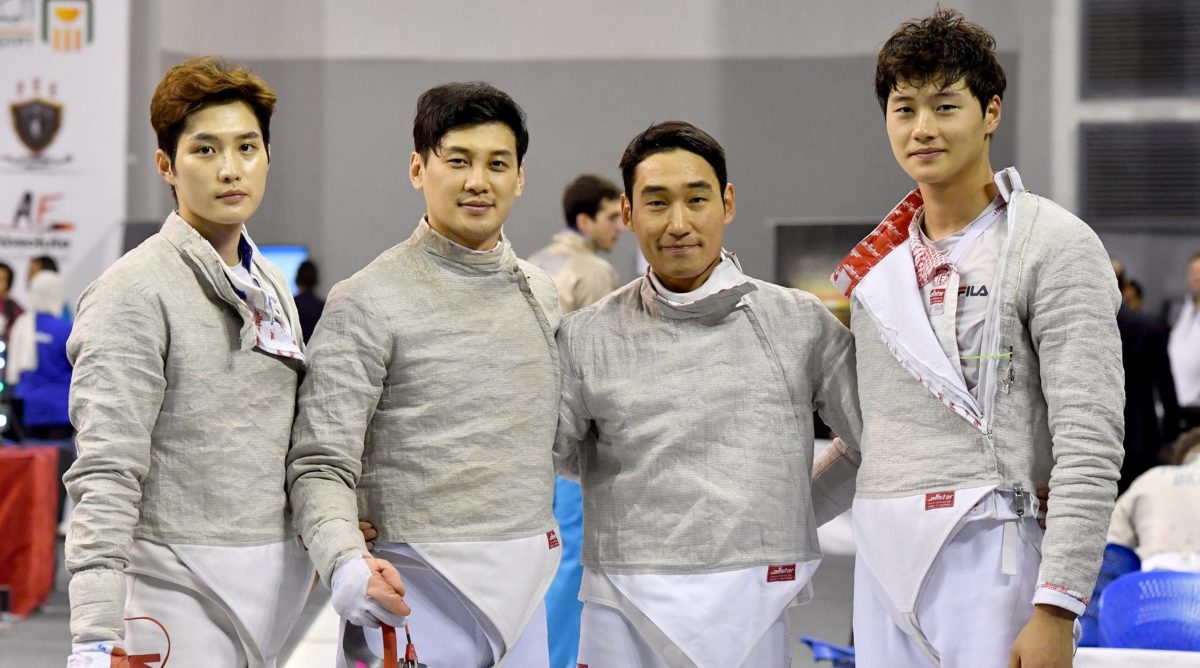 The FIE’s World Cup fencing season continued its first round of events in Cairo, Egypt last weekend, November 15-17, with French veteran Vincent Anstett winning a surprise individual gold and the top-ranked Korean team looking strong in what is now the lead up to Tokyo 2020.

Taking advantage of a draw that opened up after the world number one and two were eliminated early — Eli Dershwitz (USA) and Sanguk Oh (KOR) were ousted in the tables of 64 and 32, respectively — Anstett still had to beat quality opposition to claim his first victory in just over three years.

After qualifying from pools with a near perfect TR of 23, he then beat USA’s Rio Olympic silver medalist Daryl Homer, 15-12 in the table of 32, as well as teammate and world number 8, Bolade Apithy, 15-12 in their quarterfinal.

The Frenchman then came up against Korea’s 2018 world champion, Junghwan Kim, in the semifinal and won by the narrowest of margins, 15-14, to set up a rare gold medal match with Italy’s Luigi Samele.

Exempt from pools, on his side of the draw 32-year-old Samele had to defeat two teammates of his own to reach his fifth career final; world number four Luca Curatoli (15-9) in the table of 16, and then Gabriele Foschini (15-11) at the quarterfinal stage.

However, once he’d reached the medal rounds, the Italian still had to beat two-time African champion Fares Ferjani from Tunisia for a chance at gold, which he did, 15-8, but was then unlucky to come up against the in-form Anstett; the Frenchman using all of his experience to eventually triumph 15-14 and win the third world cup gold medal of his career.

In the team competition on Sunday, Korea set down an early mark for others to follow this season by beating China (45-34), Russia (45-39) and then Hungary (45-41) in succession to claim a convincing gold.

It might not have happened at all, however, had they not narrowly avoided what would have been a shock defeat at the hands of Great Britain in the table of 16.

Looking comfortable at 35-28 after Bongil Gu had gone 5-1 in the 7th bout against Jonathon Webb, Webb’s teammate, 82nd ranked James Honeybone, then went 12-3 against Junghwan Kim, putting Great Britain ahead 40-38 with only the ninth and final bout remaining.

Luckily, world number one Sanguk Oh was able to spare his teammates blushes, going 7-4 against William Deary to claim a last touch victory and onward passage.

In the final against Hungary, Gu and Oh got the Koreans off to a strong start, putting them 10-4 up after two bouts, a lead which despite a late surge by Gemesi and Szatmari, they were able to hold on to and win 45-41.

In the playoff for third, Italy took control at 15-10 in the third bout through Aldo Montano, and from there they were never threatened by Russia, finishing comfortable bronze medal winners, 45-31.