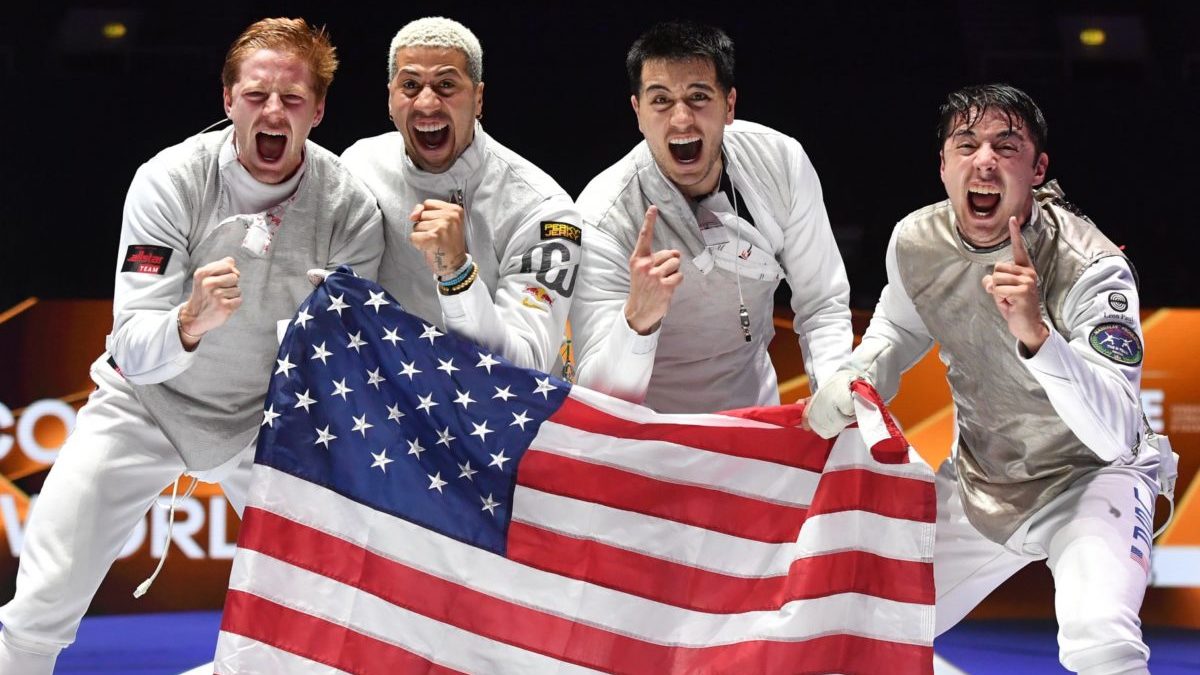 The USA’s men’s foil team has won gold at a World Fencing Championships, a historic first for the squad despite multiple recent golds at World Cup and Grand Prix events. An all-round team effort by Race Imboden, Alex Massialas, Gerek Meinhardt and Miles Chamley-Watson has ensured that the number one ranked team led early against France and were never headed. By the time Massialas made the winning touch in the final bout to go 45-32 up, the French had already been frustrated and unable to respond to the American’s relentless pressure.

Vitally important to the win was Gerek Meinhardt’s performance against newly crowned individual world champion Enzo Lefort in the third bout (5-5). Nullifying him early gave Massialas and Imboden the belief that they could do the same thing later, which they did — Lefort ending up fencing a +1. Meinhardt, whose first world championship medal, a bronze, came in this event in Paris nine years ago, personified the U.S. team’s calm approach to their work, relying on years of experience to get the job done with what seemed like a minimum of fuss, strangling any hope of French panache. Unlike the women’s team events the night before, there was no call for priority time or come-from-behind heroics; just clinical, aggressive foil fencing to close out the match.

“We fought fire with fire today,” said Massialas of the win, “every time they hit back we hit back even harder, and we never let them go on any kind of run. I’m so proud of the guys standing next to me right now.”

After Imboden had given the USA an early lead (5-1) in the first bout against Le Pechoux, Massialas extended it by one to go 10-5. After the next two bouts both went 5-5, it was Meinhardt who increased the lead in the fifth, going 5-2 up on Le Pechoux, who was fencing -7 for the match.

In a somewhat surprising move, France then substituted Maxime Pauty, who was fencing -1, for Julien Mertine. Meinhardt immediately won their bout by a scoreline of 5-2 once again to make USA’s lead a clear 11 points, (35-24) by the end of the seventh bout. Lefort threatened a comeback against Imboden in the eighth, but with pressure mounting on the French to attack, both he and Massialas had all the breathing space they needed to bring home the win.

“Last year was a big disappointment,” Imboden told FIE after the win, referring to last years silver medal in China after the team had won every world cup event that season.

“So we came together this year and really really focused on team. We worked hard and came here to fence whoever was put in our path. We got France who we haven’t fenced that often, but are one of the greatest team fencing countries in the world, so to win this is incredible. We have been the number one team in the world for a few years, and now we’re world champions!”

Commenting on the entire tournament, Imboden was full of praise for the host city and the championships in general.

“I love Budapest,” he beamed. “The competition was incredible, the venue was one of the best I’ve ever seen, and the crowds were great. I’m super excited to be here and to celebrate!”

In the other gold medal match to be decided on the final night of competition, Russia’s female sabre fencers were too strong for the French once again. Led by Olga Nikitina, who fenced a +7, Russia won 45-40 to deliver Sofia Velikaya her sixth team sabre world championship, the first of which she in New York back in 2004. Korea had earlier beaten Italy for the bronze, 45-32.

“I’m happy to win together with my teammates and happy to beat the French team today,” said Velikaya, who finished runner up to Ukraine’s Olga Kharlan in the individual competition.

For the full results of the 2019 World Fencing Championships in Budapest, check out the FIE’s website here, and follow their YouTube channel for match highlights and past event video here.