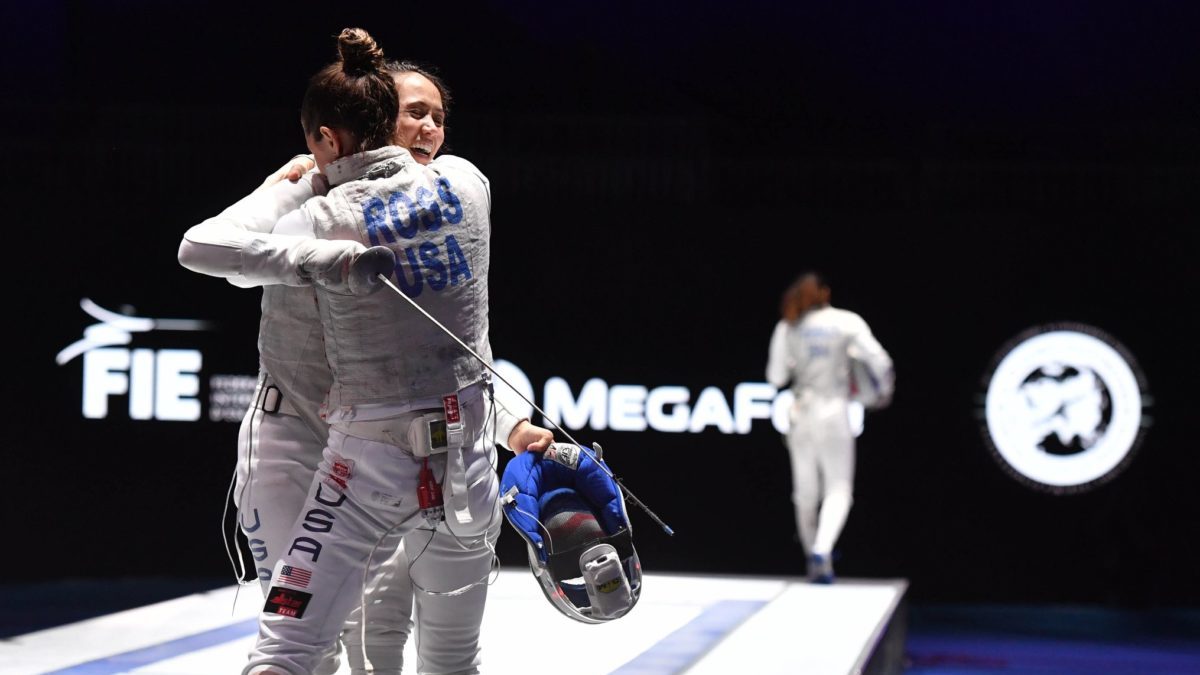 Lee Kiefer has fenced superbly during the final stages of the women’s team foil competition on Monday night in Budapest, helping the USA to its first medal of the 2019 Fencing World Championships. Beaten by eventual winners Russia in the semifinals (36-45), Kiefer still lead by example in the bronze medal playoff, stealing a come-from-behind win over France (45-43) in the final bout of the match.

🥉 For the first time in history, a U.S. foil team won three consecutive Senior World medals today with the U.S. women winning bronze after gold and silver medals in 2018 and 2017. Team USA beat No. 1️⃣ France, 45-43, in a hard-fought final with Olympic qualification points on the line! 🇺🇸 🇺🇸 🇺🇸

In the gold medal decider between Italy and Russia, there was also high drama. Individual world champion Inna Deriglazova needed a sudden-death priority minute and a point penalty against Italy’s Elisa Di Francisca to complete a remarkable win for Russia (43-42).

Having not won a medal from the first four nights of finals in Budapest, Team USA would have been hopeful of one from their 2018 world champions in the women’s team foil. Advancing to the semifinals via a closely fought victory over Canada (45-41), they then ran into a red-hot Russia, who were led by Deriglazova. She got them off to the perfect start, winning the first bout 5-0, before a 7-3 in the fifth established a 16-point lead — Ivanova and Korobeynikova having also won their bouts. Kiefer then pulled out an incredible 14-5 over the latter to keep American hopes alive, but it wasn’t enough, Russia advancing to the gold medal match by a nine-point margin.

In the playoff for bronze with France, who had been out-classed by Italy’s team of former World and Olympic champions, it was Kiefer who breathed life into her team’s medal chances again. Putting their noses in front (30-29) for the first time in the match after an 8-4 victory over Ranvier in the sixth bout, Kiefer still had to overcome a two-point deficit (38-40) by the time she fenced France’s number one, Ysaora Thibus in the ninth. Down 42-43 with a minute left on the clock, the diminutive right-hander then applied every bit of her experience, speed and dexterity to score the next three touches in a row, finishing with a parry-riposte to claim USA’s first medal of these world championships, and a slice of history. The bronze medal in Budpaest is the first time a U.S. foil team has won three consecutive senior world medals, having won silver in 2017 and gold in China last year.

In the seesawing gold medal match, Italy led the Russian’s 40-38 with one minute left on the clock in the final bout. Deriglazova then got it to 40-40 with 41 seconds left, before Italy’s 2012 Olympic champion, Di Francisca took the advantage 41-40 with only 14 seconds remaining. Deriglazova equalized immediately, before the Italian scored again, making it 42-41 with only 11 seconds left in normal time. After the next engagement, chaos briefly ensued when Di Francisca removed her mask illegally. The match referee had no choice but to award a point to Russia for her second yellow card infringement, leveling the score at 42-42. With only 6.48 seconds remaining, the bout was then allowed to go into a priority minute, which Deriglazova won by another parry-riposte, sparking scenes of jubilation — and shocked disappointment from the Italians.

“We fell behind and led at times,” said Russian number-two Anastasiia Ivanova after the win. “We tried our best, and sometimes it worked and sometimes it didn’t, but we did everything to win and thank god we did!”

In Tuesday’s final night of action from the BOK Sports Hall in Budapest, USA will go for gold in the closing event of the championships; the men’s team foil final against France at 18:50pm Central European Time (CET).

Also up for grabs is the women’s team sabre at 17:40pm CET, where Russia will also meet defending champions France in the final. Check out all results at the FIE’s website here, and check out their YouTube channel for live coverage and previous event videos here.