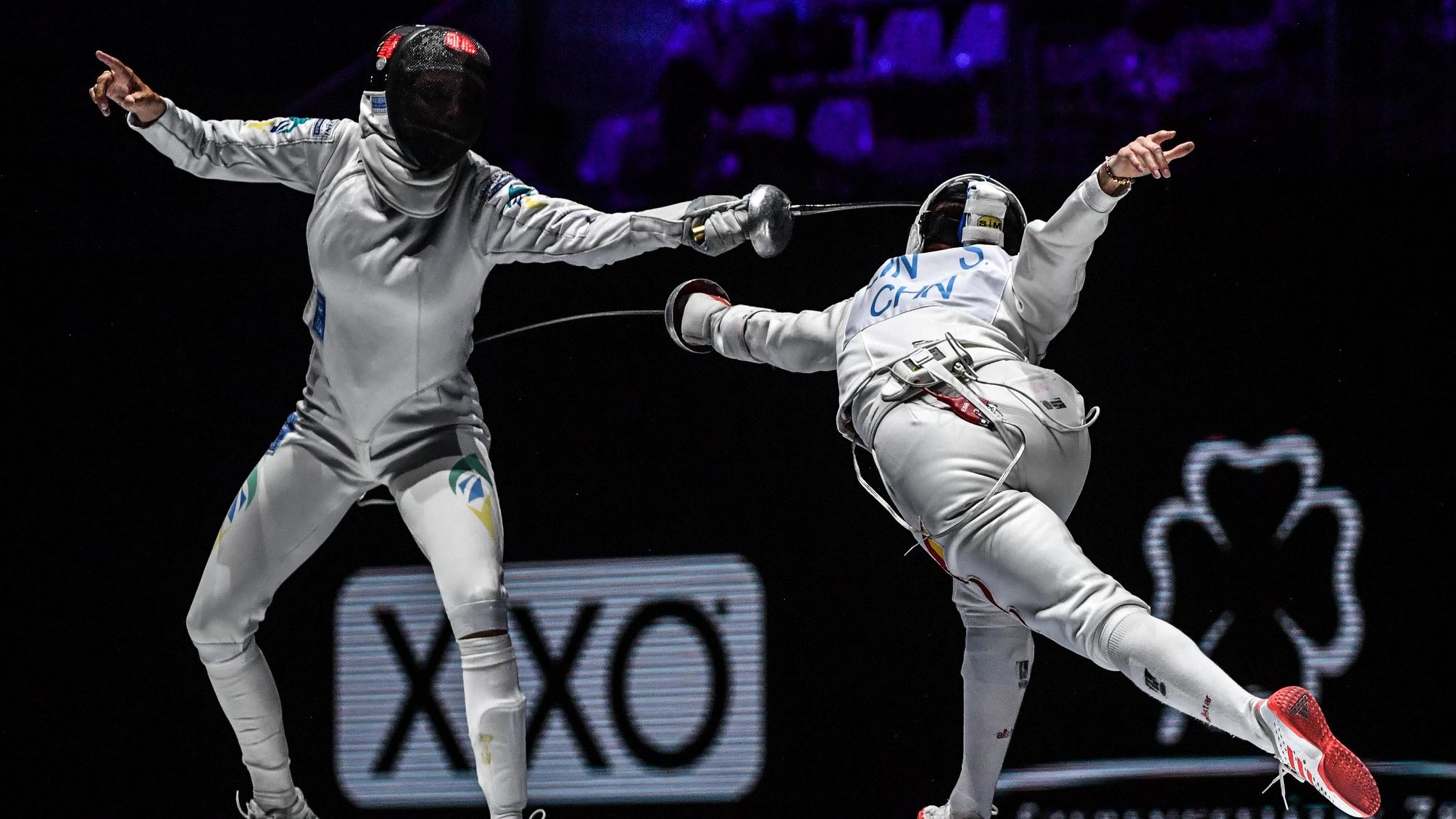 A dramatic gold medal bout that went to a priority minute has decided the women’s épée and provided the highlight of Day 3 at the FIE’s World Fencing Championships being held in Budapest, Hungary.

Brazil’s Nathalie Moellhausen was the first fencer to be crowned world champion on the first of three nights of individual finals inside the BOK Sports Hall in Budapest this evening (CET). Her gold medal match against China’s Sheng Lin in the women’s épée went to a dramatic one-minute overtime period to decide it, with Moellhausen needing to make a sudden-death lunge and touch to cap off a remarkable victory and claim her first individual world championship gold.

The result is the first time a fencer representing Brazil has won a medal of any kind at world championship-level, and Moellhausen, who fenced for Italy until 2012 before briefly retiring and then switching allegiance to Brazil in 2014, fell to her knees on the piste and broke down in tears after her victory. Her jubilant teammates and family members then mobbed her before the Brazilian national anthem rang out for the first time ever at an FIE World Championship not long after.

“When you believe in yourself, your dreams can come true,” she said after her emotional win, revealing that she had nearly quit fencing the previous year, before coming back to the sport as recently as January. “I did everything really fast with only one goal after that,” she explained, ‘to become world champion in Budapest.”

Locked at 12-12 after the regulation three periods of three minutes, Moellhausen needed every bit of her experience and athleticism to defeat Lin, despite her opponent nursing a leg injury sustained at the Asian Championships last month in Tokyo, where she had been a close runner-up to her teammate Mingye Zhu.

Before Lin and Moellhausen progressed to the final bout in Budapest, the pair had been helped by a draw that opened up significantly when the number one and two-ranked fencers at the start of the competition; Ana-Maria Popescu of Romania (1) and defending champion Maria Navarria (2), of Italy, were eliminated in the tables of 16 and 32, respectively.

Prior to tonight’s result, Lin’s best (and only) individual result at a senior World Championships was last year’s 60th place in Wuxi, the same year she won bronze in the team event. Moellhausen won team gold in 2009 and individual bronze in 2010 in Paris, when Lin was embarking on her first year on the senior world tour as a prodigious 16-year-old.

World number-one Popescu’s conquerer, Olena Kryvytska of Ukraine, went as far as the semi-final, where she seemed confident of victory at 13-9 against Lin, but managed to lose when the resilient left-hander forced their bout into her first of two priority minutes of the night; 14-14. The drama in this match was also heightened, Lin believing she had won before Kryvytska’s blade failed to register and they were forced to replay the sudden-death point. Luckily for Lin, once the clock was re-started, she was able to out-touch the Ukrainian one more time.

In the other semi-final, Moellhausen was put to the test by Hong Kong’s world number three (and now number one) Man Wai Vivian Kong with scores tied at 8-8 by the end of the second period. The 33-year-old then belied the pair’s difference in world rankings, (Moellhausen was 21st at the start of this event) advancing to the final by a score of 15-11 after the third.  After a career which has included two Olympics — one as a reserve for Italy in 2012 — for two different countries, the outpouring of emotion after her victory was attributed in part to the recent death of Moellhausen’s father, who had played a huge part in her fencing career.

In the other final to be decided on the night, the men’s sabre, 22-year-old Korean sensation Sanguk Oh was too good for local hope and 2017 world champion Andras Szatmari of Hungary. He won their gold medal match by coming from behind to win 15-12 — his first of possibly many gold medals. Mojtaba Abedini (Iran) and Lucas Curatoli (Italy) were the beaten semi-finalists, while the USA’s world number one Eli Dershwitz was one of Szatmari’s scalps, losing their table of 8 bout by a clear margin, 8-15.

Despite trailing 2-7 in the first period, and later 5-9, Oh was able to claw his way back into the match during the second period, before gaining the momentum he needed to win. The victory follows up his compatriot Kim Jung-hwan’s gold in the same event last year and installs him as a favourite for Olympic gold at Tokyo 2020.

“It’s an honour to win,” Oh said after the match, “it’s great to have a Korean fencer win two years in a row.”

The 2019 World Fencing Championships continue in Budapest until July 23. Check out all results at the FIE’s website here, and follow their YouTube channel for live coverage here.