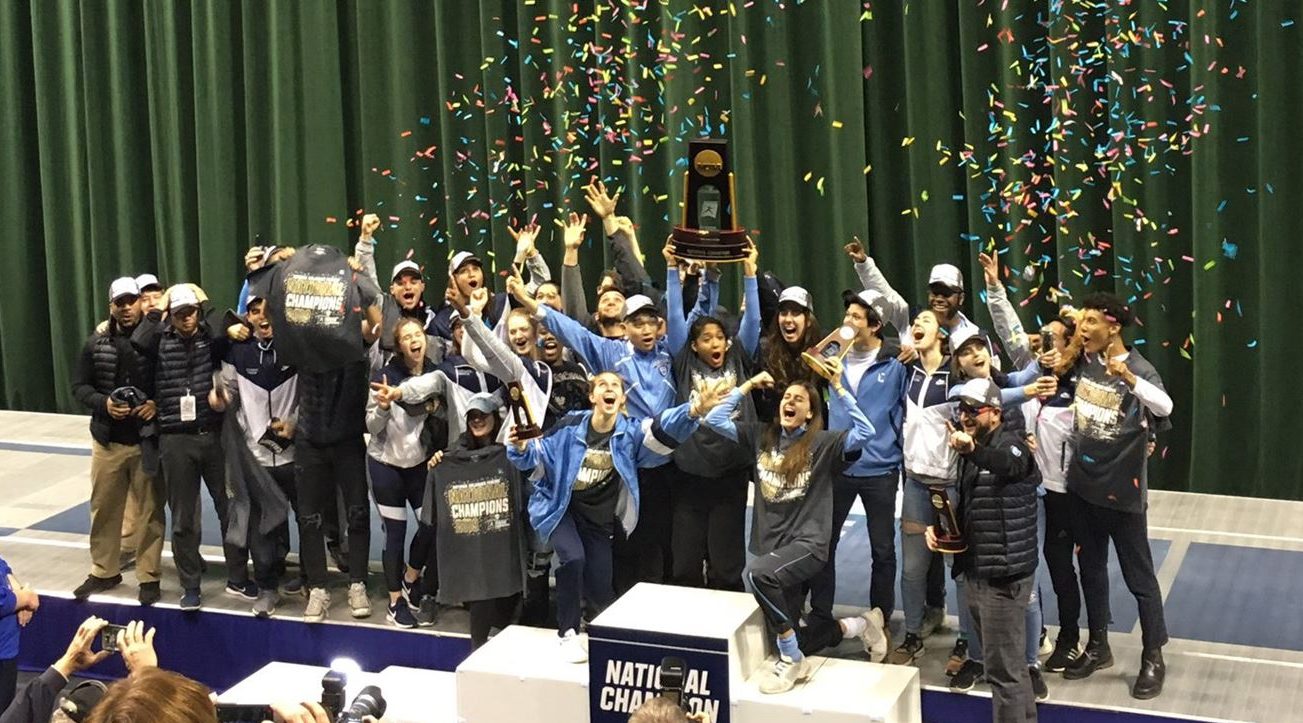 Columbia University have lead the NCAA Fencing Championships from start to finish to win their 16th national title after four days of competition in Cleveland, Ohio over the March 21-24 weekend. The win is the schools’ third in the last five years after going back-to-back in 2015 and 2016.

Leading after days one and two, when the men’s team got off to a strong start by winning 90 bouts, Columbia’s women were able to maintain their advantage over Penn State and Notre Dame on day 3, before delivering victory on day 4 and claiming two individual titles.

Fencing at her first NCAA championships, junior epeeist Anne Cebula took 15 wins from 23 bouts in the qualifying pools, before making the final and defeating Notre Dame’s Amanda Sirico, 5-3. Sirico had a superior record going in, but was unable to get through Cebula’s defense in a low-scoring affair. Forcing the bout into overtime, Cebula eventually claimed it, sparking jubilant scenes amongst her Columbia teammates. For Sirico, it was her third minor medal at this level, having twice been a beaten semi-finalist, in 2017 and again last year.

After that it was the turn of highly decorated sophomore foilist Sylvie Binder. The 19-year-old fenced well during the first three pool rounds on Saturday, but turned it up a notch on Sunday, going on a ten bout winning streak to secure her first NCAA individual title. Achieving an outstanding record of 19 wins from 22 bouts, and an indicator of +52, Binder was too good for Katarzyna Lachman of St. John’s in the final, taking it 15-8.

The victory ensured the women’s individual foil stayed at Columbia, as t was a repeat of the victory of her teammate Iman Blow in 2018. The final had very nearly been an all-Columbia match-up, but Blow fell short by one touch to Lachman in their semifinal (14-15) and didn’t get the chance to go back-to-back. However, she did have the honor of making the touch that secured Columbia the overall victory, during her fifth round bout against North Western’s Alyssa Chen, which she won 5-2.

Other notable Columbia performances came from Teddy Lombardo who was runner-up in the men’s epee, and Sidarth Kumbla who was third in the men’s foil. Kumbla’s result included defeats of Notre Dame’s eventual 1st and 2nd place-getters, Nick Itkin — the 2018 World Junior and defending NCAA Champion— and Axel Kiefer. In the final, it was Itkin who ensured he did go back-to-back, defeating his teammate Kiefer by 15-6.

Speaking after the result, Columbia Fencing Head Coach Michael Aufrichtig said that he couldn’t have been more proud of his team, and described an emotional team meeting on Saturday night as a turning point.

“This last four days has been a whirlwind, a rollercoaster,” he described. “Yes, we were always on top but we never let up.”

“Firstly, the men brought it with 90 victories to put us ahead, and then when we were 4 bouts ahead after day 3, the team got together and we had a meeting where a lot of things were said. Some seniors spoke up, some freshman spoke up, and there was a lot of crying, but at the end of it the vision was to go out there and be yourselves. So that’s what they did. The women came out today and brought it home for us. I couldn’t be a prouder coach.”