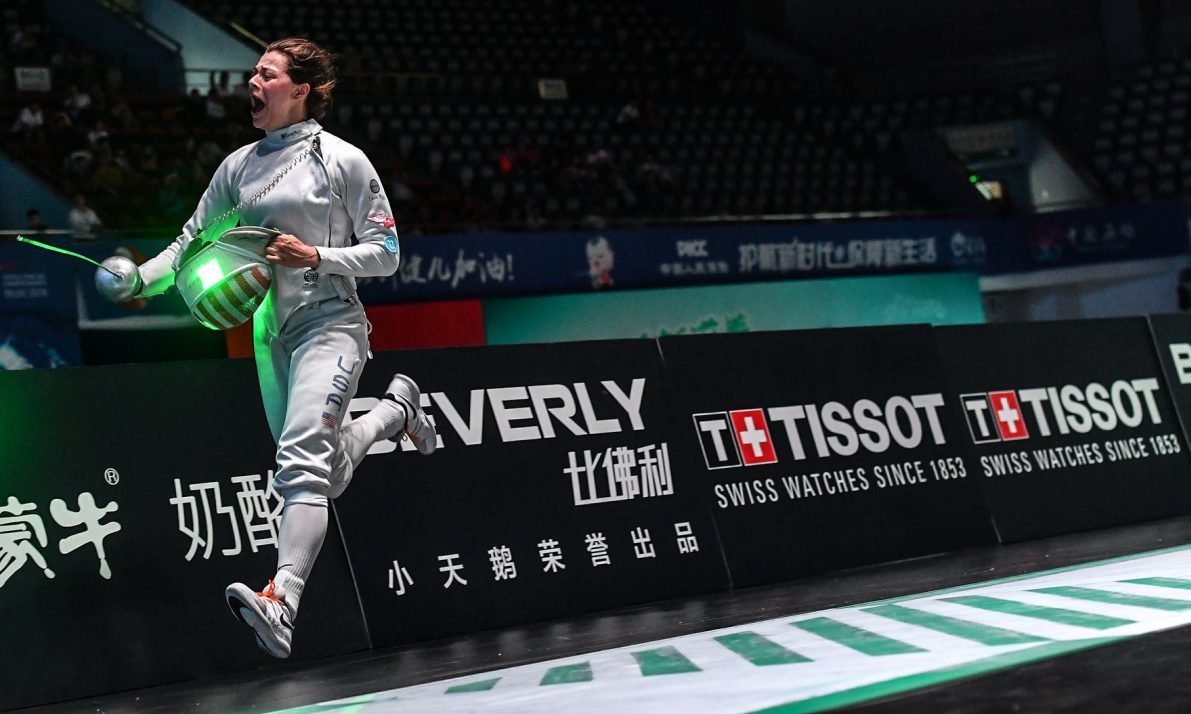 USA and Korea have taken the first of six team gold medals to be handed out at the ongoing world fencing championships in Wuxi, China.

Coming from behind in every one of their matches from the quarterfinal stage on, including overtime wins in the final and quarterfinal against defending champions Estonia, the American team of Katherine Holmes, Courtney Hurley, Kelley Hurley and Amanda Sirico showed incredible determination to create history, becoming the first US epee team to win a world championship gold.

Anchored by 2016 Olympian Holmes, who seems to save her best for the team events, in the gold medal match against a strong Korea, the US trailed all the way until the final bout, when it was Holmes herself who went searching for the win. Tying the score at 17 each with just 11 seconds left in the final period, she then managed to get the hit she needed 30 seconds into overtime against world number 7 Injeong Choi, and secure a dramatic 18-17 victory for the Americans.

“Going into the final bout, there’s a high ceiling,” Holmes told FIE’s Fencing Channel afterward. “As long as it’s relatively close, I have my plan and I’m going to try to force the other person to fence my plan. Today everybody was fencing my plan,” she said.

Teammate Courtney Hurley paid tribute to Holmes nerves of steel throughout the tournament. “She doesn’t get nervous!” she said, “and that’s why she’s really good at her job. We thought we could just keep it close until the end because Kat’s been doing so amazing at the end and that’s exactly what we did.”

We are the Champions my friends … Team USA won the first ever team title for a U.S. women’s épée squad! 📷 #bizziteam

China picked up their first medal of the championships by defeating Russia in the bronze medal playoff 45-42.

In the men’s team sabre, Korea had too much class in a team containing three of the world’s top five, including the individual gold and bronze winners at these world championships Junghwan Kim – who was incredibly used as a reserve in the final against Italy – and Junho Kim. Rounding out what must be one of the best sabre fencing teams ever were six-time Asian champion Bongil Gu and 21-year-old Sanguk Oh, who already has four senior international World Cup and Grand Prix victories to his name.

And it was Oh who overturned an early deficit in the final, dominating Luigi Barre 8-1 in the second bout after Italy’s Luca Curatoli had briefly put his team in front 5-2. After that they were never headed, with Oh also defeating Barre 5-0 to establish what turn into a match-winning lead, blowing out to 26-40 by the time Junghwan Kim had also out touched Barre in the penultimate bout, 5-2. It all meant that despite Luca Curatoli’s 13-5 victory over Oh in the final bout, Korea still ran out winners 45-35 and defend the title they won in 2017. Hungary defeated Georgia for the bronze medal 45-36.