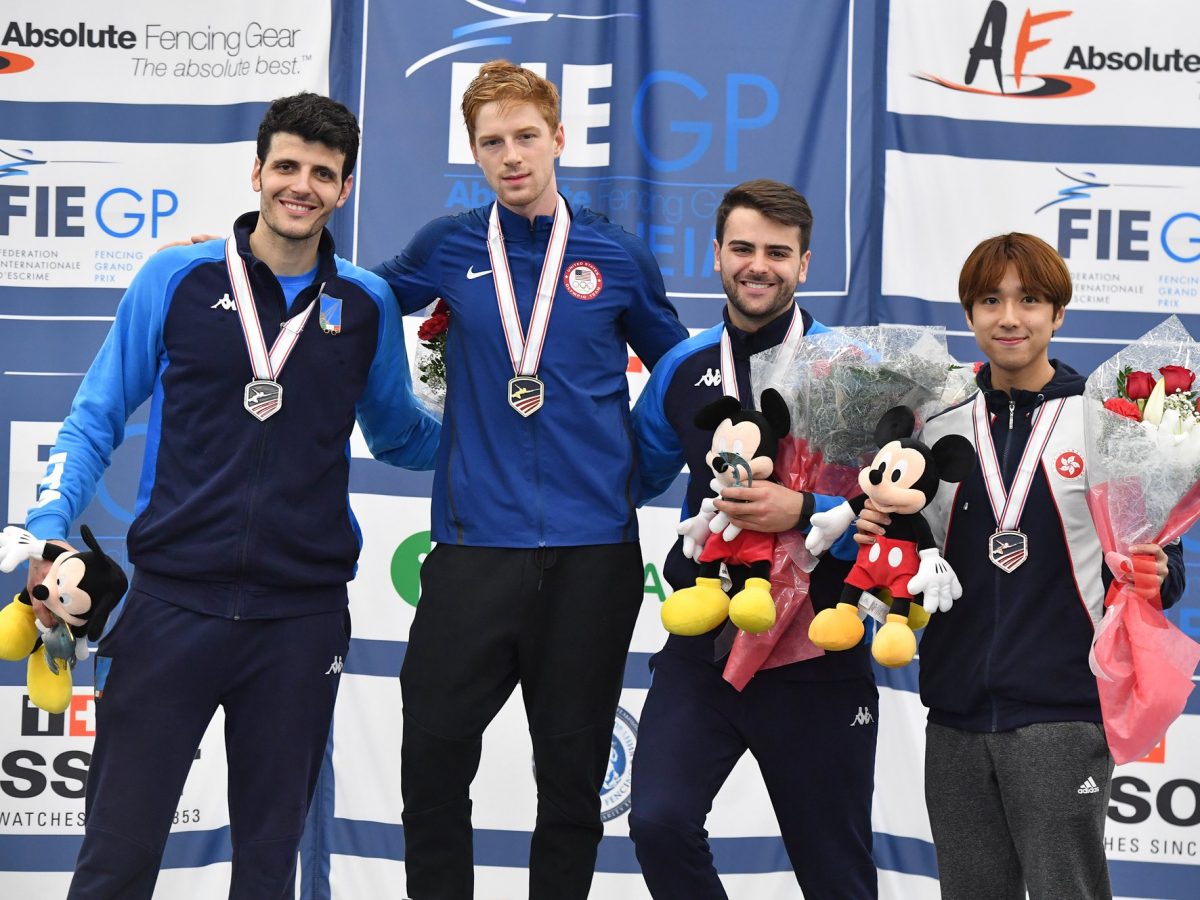 Two separate FIE events kept fencing fans busy over the weekend as a women’s sabre fencing World Cup event was held in Greece at the same time as the Anaheim foil fencing Grand Prix in California.

On a day when several Olympic and World Championship medalists fell early, Imboden needed to beat two former individual world champions, including team mate Miles Chamley-Watson (15-12) in the table of 32, and Italy’s Andrea Cassara (15-10) in the final, to take his first Grand Prix victory.

“I just took all of my bouts touch by touch today,” Imboden said after his win, “I didn’t rush anything. I didn’t think about getting streaks of touches or forcing anything. I just kind of let it happen.”

Also beating Rio Olympic bronze medalist Timur Safin from Russia on the way, Imoden said he enjoyed the ‘home’ crowd support. He has been training just twenty minutes away from the venue since 2016.

“Fencing with the crowd behind is you is always amazing and the venue is great. I had a good time,” Imboden said. “I’ve been working really hard and I’m just happy to come out and perform well.”

The win takes him to No. 3 on the FIE world rankings.

Standing on the dais alongside he and Cassara were two giant-killers; Italy’s 57th ranked Damiano Rosatelli, who beat current Olympic Champion and teammate Daniele Garozzo (15-11) in the table of 16, and Hong Kong’s 31st ranked Edward Choi, who took out the last two Olympic silver medallists, Team USA’s Alexander Massialas (15-13) in the table of 32 and Egypt’s Alaaedlin Abouelkassem (15-14) in the table of 16.

In the women’s event, dual US Olympian Lee Kiefer could not defend the title she won in Anaheim last year, narrowly defeated by eventual winner, current Olympic and two-time World Champion Inna Deriglazovia from Russia (15-14).

In the other women’s semi-final, Germany’s Anne Sauer defeated her teammate Leonie Ebert (15-14) to achieve her best career result to date. In the final, Deriglazovia was too strong for Sauer, taking out the win 15-3.

‘The most difficult thing today was to fight against Russians, my teammates’, said Deriglazova. ‘To enter into the 16, I had to fight not only my teammate, but my best friend.’

In the teams event, Italy was too strong for a surprising Korea (45-31) in the final, while France defeated the USA in the playoff for third, 45-41. Korea had upset France in the first semi-final 45-43, while Italy defeated USA 45-39 in the other.

Rounding out the top-eight were Russia, Spain, Hungary and China.