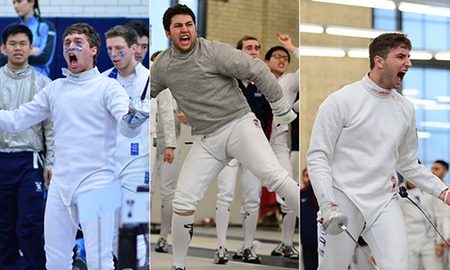 The Princeton fencing team finished up the 2017 Ivy League Round Robins with a 1st place finish in Women’s 3-Weapon Team and a 3-way tie for 1st in Men’s 3-Weapon Team, along with Columbia and Penn.

Full results are posted at Escrimeresults.

Princeton’s women’s team ended the event with a perfect 6-0 record, anchored by an 18-0 performance from Kat Holmes. On the men’s side, Princeton, Columbia and Penn all ended the event with 4-1 records. This resulted in a 3-way tie for 1st place, which is a repeat of the 2016 event. Despite not finding success on the team level, Harvard had two individual standouts. Eli Dershtwitz (saber; 14-1) and George Haglund (foil; 12-3) both took home individual championship titles.