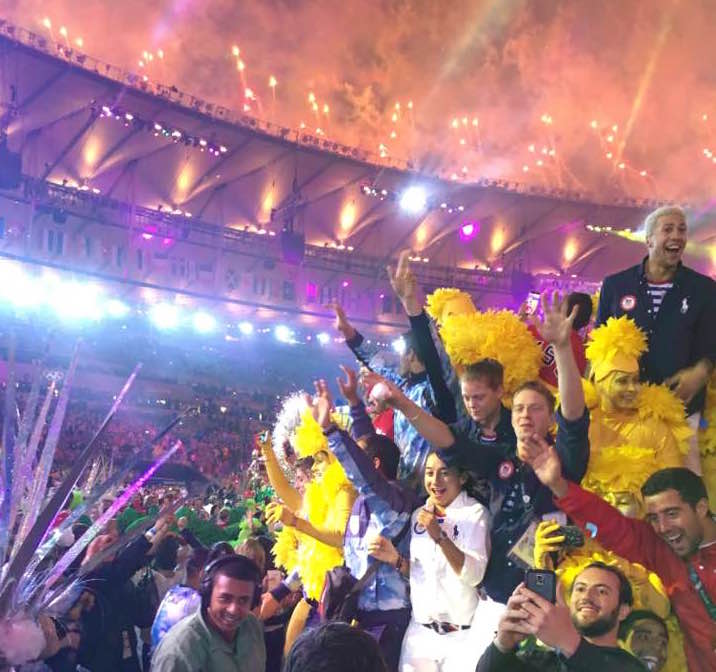 Sunday evening saw the 2016 Olympics draw to a close, with athletes from all over the world flooding into the Maracanã stadium for the final celebration in Rio. As expected, the event exuded a different energy than the Opening ceremonies, which can sometimes feel tense and formal in the host country’s effort to mark the historic importance of the Games. Closing ceremonies, on the other hand, are much more relaxed with athletes joyfully reveling in the spirit of one of the greatest parties on earth.

Sunday evening saw the 2016 Olympics draw to a close, with athletes from all over the world flooding into the Maracanã stadium for the final celebration in Rio. As expected, the event exuded a different energy than the Opening ceremonies, which can sometimes feel tense and formal in the host country’s effort to mark the historic importance of the Games. Closing ceremonies, on the other hand, are much more relaxed with athletes joyfully reveling in the spirit of one of the greatest parties on earth.

You can be assured that there will have been legions of selfies taken with the Olympic flame extinguishing behind, as many try to capture this emotional moment for posterity. It’s during these final hours that you feel closest to your athlete friends, new and old. It’s also a time when fencers stand side by side with some of the biggest sports celebrities in the world, sharing a mutual respect born of the similar sacrifices that have been made along the way. Even if it’s just for those few weeks, there is a feeling of being more the same than different to those who will return to lives packed with autograph signings, TV commercials and press junkets. Many a photo will be taken with athletes huddled together from different countries and from all walks of life, doing whatever they can to cement this bond of shared purpose. This night is the final bookend to a collection of memories that will last a lifetime. I cherish my own memories of the 2004 and 2008 Olympics and return to them often.

Life after the Games – Regeneration

The period following the Olympics is one of the toughest in an athlete’s career, even if they have performed well. Prior to the Games, the mind is hyper-focused on one singular point – the summit of Mt. Olympus ahead of you. Everything you do is about climbing that craggy mountain. After the Games that all changes, and many struggle in the absence of this all encompassing goal.

The athletes are simply physically and emotionally exhausted. In qualifying for the Games, untold energy is spent competing, training, travelling, and frankly, just containing the nerves. Post Olympics, these fencers may continue to go through the same motions of training and competing, but it is nearly impossible to ask your body to stay in the peak state which was required in an Olympic year. It’s as if your battery is switched to low power mode, forcing you to recharge and focus again on other aspects of your life.

Another curious effect of the Olympics is what’s sometimes called “Post-Olympic Depression.” Counterintuitively, some athletes can’t explain why, but feel a sense of sadness occurs after experiencing what many will consider to be their greatest accomplishment. For many sports like fencing, the Olympics is the moment on the “Big Stage.” Afterwards, however, one must return to the world of the semi-ordinary, muddling through day to day life and shopping the frozen section at the local supermarket. In the lead up to and during the Games, there is so much excitement and a feeling that what you are doing captivates the attention of others around you. You receive messages from long lost friends, family and even random people, who go out of their way to wish you well.

But sadly, as the Olympic flame extinguishes, so does that feeling of stardom. Despite the fact that everyone is incredibly proud of you, there is still a sense that you shine a little less bright within your constellation of friends and family. This is very tough psychologically, compounded by the fact that you often judge yourself for feeling that way. You blame yourself for being selfish or greedy for others’ attention.

The Big Question: What’s next?

For many, the completion of the Games brings them to a fork in the road ahead. It is a natural moment to ask, what’s next? There are those who are certain that they will keep fencing. These athletes are often younger and surrounded by a strong system which makes continuing to fence an obvious choice (e.g. a college team). Or, there are fencers with a very strong understanding of their goals and a deep purpose that drives their passion and commitment to carry on.

And there are also those who are less certain about which direction to take. I left both the Athens 2004 Olympics and Beijing 2008 Olympics feeling this way. My mother, Kathleen Rogers, reminded me of something recently that she used to say to me that cuts to the heart of the issue.

“Fencing is like a incredible train trip that takes you to interesting and remarkable places. The trick is to figure out on which stop to disembark.” – a now non-anonymous fencing mom

Oh no…more questions! Where do you get off? Is this the right stop? How do you turn your athlete’s focus to new life challenges like work and family? Or, should you stick with what you know and invest another four years giving this Olympic roller-coaster one more go around? What will be the rewards? What will be the sacrifices?

The conscious decision to stop doing something that’s been a foundational part of most of your life is an intimidating chasm to cross. What many don’t realize is how deeply ingrained being a fencer is to your identity. And new thoughts about leaving everything you know behind begets new and unsettling question about who you will become. Can you be like everyone else?

Deep inside every athlete is a buried envy of friends and people that live normal lives. They spend their Saturday mornings doing something other than plyometric exercise. They socialize with friends at 6pm on Wednesday evenings, and are not sweating at practice. They do not live their lives in a state of permanent jet lag. (This is, of course, a double edged sword – pardon the pun – because once “normalcy” is achieved, the brain very quickly jumps back to craving variety and adrenaline).

The Struggles of an Athlete In Transition

At some point, your decision is made and now the challenge becomes how to navigate this new, unfamiliar path. Some retiring fencers elect to remain in the greater world of fencing and become world-class coaches, mentors and/or administrators. Many go on to graduate school (which had been on hold) and/or corporate jobs, and it is these athletes that often stumble on some of the following unforeseen challenges.

In 2010, after two Olympics (2004 & 2008), I made the decision to exit the world in which I was considered an “expert” (saber fencer) to embark on a new career in marketing where I was a total rookie. This was by far the hardest part of my transition and really made me question this decision. I often found myself angry and frustrated that I didn’t even know where to begin to look for the types of answers that, in fencing, were completely intuitive. I found myself surrounded by contemporaries that were 5-6 years younger than I, who all seemed to have their career paths all figured out. This left me to wonder “Am I drastically behind and will I ever catch up?” It wasn’t until I realized that I possessed specific transferable skills; like focusing on the present, goal setting and poise under pressure that I started scrambling up the steep learning curve. And then, finally, I felt much better about the huge changes I had made and the challenges ahead of me .

2. My friend, the fencer

While the sport is growing in size and stature, fencing occupies the mental space of the unique. We fencers tend to stand out because of this interesting thing we do. Every fencer will be familiar with the “Oh, you fence? I know a fencer named…” scenario. This curiosity is much less common with other sports because everyone knows a number of people who play mainstream sports like soccer or tennis. While it’s always a bit embarrassing when friends and family ask you to demonstrate your fencing prowess with pointy objects (the umbrella is a particular favorite on non-fencers), the idea of no longer being ‘the fencer’ is quite scary. If I’m not “the fencer”, then who am I really? At first I felt naked without my old identity and often fell back on the “I used to be a fencer” response to help people understand who I thought I was and why I might be interesting to them.

3. Wait, I don’t get a medal for this excellent performance?

Fencers tend to be quite driven, and when the sport is no longer the epicenter of your energy, there is a huge void to fill. Because many of us seek a personal sense of achievement (or else why would we sacrifice thousands of hours of our time for plastic trophies) the idea of not having specific milestone goals can be very unnerving at first. Even if you do have clear objectives in the new path you are pursuing, accomplishing them feels different from making your first final or beating an opponent that has had your number for months.

Similarly, it can be really hard not to have instantaneous and clear feedback on whether what you are doing is “right” or “wrong.” In fencing – and sport in general – there are immediate actions and reactions that help you judge the choices that you make. A coach can give you concrete suggestions such as “extend your arm this way, not that way,” and the result of a practice bout helps you determine if you are improving a certain skill. And most importantly, tournament results and rankings are a clear (although not definitive) indication of whether you are progressing in the right direction.

This all changes in your new life. I found that working in an office was much more complicated and stressful than practice or tournaments, and “winning” in that environment is a different beast entirely. At best, you are receiving feedback from others (such as your boss) on an ad hoc basis, and that information is often quite difficult to interpret. If you view it as an athlete, you can be left asking “Hey, but what about that very specific thing that I did here, was that good or bad?”

The good news is that by virtue of being a top fencer, we are uniquely prepared for most of what the real world throws at us. My Teammate Keeth Smart, Olympic Silver Medallist and 3-Time Olympian, discussed this in a recent conversation.

Keeth, like many other competitive fencers, has gone on to a successful new chapter. Not only is he a proud dad, an MBA graduate from Columbia, but also also the COO of activewear startup, Physiclo

. I have no doubt he will knock down any wall in front of him. We fencers only need to remember that we all have it in us to do exactly the same!

About the author: Jason Rogers is an Olympic Silver Medalist, Two-time Olympian in Men’s Sabre and founder of Betterfencer.com, a website offering advice and insights from the best in the sport of fencing.