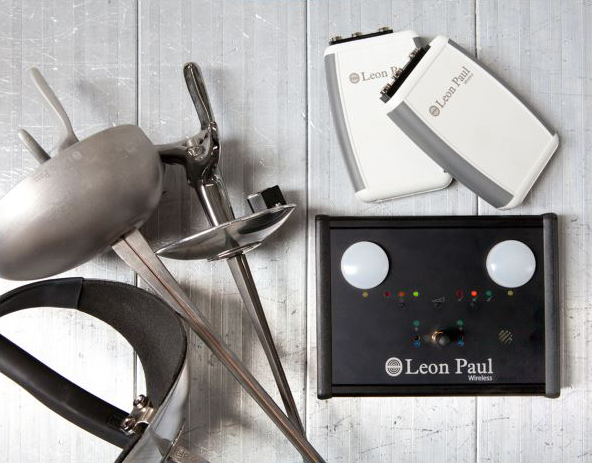 Leon Paul will be marketing this system soon. It's said to be fully FIE compliant and works for foil, epee, and saber.

Leon Paul has a new wireless scoring system for all 3 weapons coming out to the market soon.

According to the splash page on Leon Paul’s site the system’s features include:

The system will be priced between $1000 and $1200, which comes in right around the cost of a complete Favero scoring set with reels and a little bit more then an overhead reel setup. If the system works as advertised, then the long term savings on not having to do reel maintenance makes this a good buy.

The wireless units can come “slaved” to the main scoring unit, which would make walking off with them impractical for a fencer. Still, clubs using this will want to put some controls in place to have fencers turn in the fencer unit when they complete a bout. (Who wants to wait around trying to figure out where the unit went while the fencer goes to get a drink of water after the bout?)

Leon Paul stated that they would offer a “locked” set, but fencers could purchase their own personal packs that could synchronize with any base station. The locked set would cost a bit more than the basic set (not sure by how much). The personal packs are expected to go in the $200 range.

This unit was designed for club use first, and not targeted at FIE events. On submitting to the FIE contest for wireless systems last year, Alex stated that Leon Paul had submitted it for testing, but not by the deadline:

The LP system was sort of submitted to the contest. We missed the deadline for the competition but subsequently it passed all FIE test procedures in front of a SEMI member in December 2014. In our opinion a target of Rio was not feasible and we decided instead to go ground up rather than top down.

This system promises to be a great advance for those clubs that would want to use something like the HitMate or Favero Wireless system, but want something reliable enough to run a tournament. The cost is double the cost of the Favero system, but for something that is secure and works well enough for tournaments (and works for all 3 weapons) that price will be worth it.