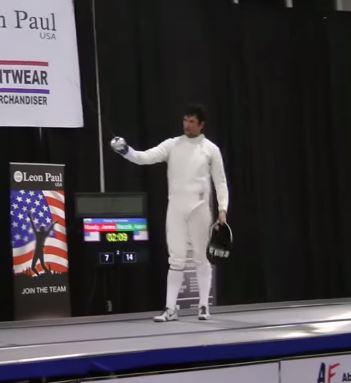 For more information on the distance terminology I’m using and what I’m looking for in this bout, refer to my guide on watching YouTube fencing. Video credit and image captures goes to Andrew “CyrusOfChaos” Fischl.

The 2015 Fencing year kicked off with the Salt Lake City, Utah NAC, which pit Olympic Training Center (OTC) residents Jimmy Moody and Adam Maczik into the gold medal bout. Anyone who has fenced either of these two knows just how difficult it is to square off with them. Moody is an quick footed, agile athlete with stellar closing speed and A+ blade takes in opposition, and Maczik an imposing, tall, strong armed fencer who is always in his opponents’ faces (a la Novosjolov). Maczik came into the tournament as the 28th seed and walked out with a gold, fighting his way through the “front door” into the eight with a bracket that included Alex House, Cooper Schumacher, James Kaull, Peregrine Badger, and finally, Jimmy Moody in the final. This is a video breakdown of the gold medal bout.

Moody begins fencing this bout as a faster tempo than Maczik, who is choosing to go with slower, more calculated steps. The bout is fenced mostly at “B” distance, or in the advance-lunge range, which almost never changes throughout the entirety of the bout.

Moody begins to push Maczik, who gradually retreats in the direction of his two meter zone. Maczik does an excellent job of constantly changing lines and destructive beats to thwart Jimmy Moody’s excellent blade takes. Moody comes in with a quick eight in opposition as Maczik disengages and is able to hit Moody with a close shot just before a corps-a-corps. 1-0, Maczik.

But Moody is ready and explodes into a fleche attack the moment Maczik recovers. 1-1.

Once again, the two resume fencing at “B” distance as Maczik gradually retreats and attempts to pull Moody to his end of the strip. Note that at various points in Moody’s preparation, Maczik begins to extend over Moody’s bellguard towards his arm…

As a way of judging Moody’s distance, and ultimately judging the timing to attack into Moody’s preparation. This ultimately becomes the winning strategy in the bout. Moody continues to feint with a sweeping eight in preparation, and changes lines to a beat four fleche that turns into a double. 2-2.

Maczik continues to take calculated, small steps, and rather than retreat, initially keeps the battle in the middle of the strip, often holding his ground while remaining ready and on the balls of his feet. Inch by inch, he presses Moody, cornering him more and more as Moody retreats. Moody responds by searching underneath Maczik’s bellguard to fend him off with a threatening preparation. Finally, Moody attempts his fleche attack again, with a feint to the top of the hand to bait Maczik’s parry, but Maczik’s hand positioning allows him to close Moody out in six and score a single light. 3-2 Maczik.

Moody significantly changes tempo on this touch, upping both the rate of movement in his hand and feet, hoping Maczik follows suit. But Maczik sticks to his game here and continues with his smaller steps on the retreat as Moody pursues. Moody does an excellent low line feint that Maczik thinks he has the timing on to hit him in prep, but instead, Moody catches him off balance…

And then finishes the action with a deep lunge. 3-3.

And now Moody slows down the tempo once again, this time matching Maczik’s. Maczik slowly pushes forward, then breaks distance and begins to retreat. Moody, in pursuit once again, speeds up to a faster tempo hoping to replicate the success of the previous touch in catching his opponent off balance. As Moody nears, Maczik deceives distance with constant half advances and binds to throw off Moody’s preparation. Remember when I mentioned Maczik judging timing and attacking over the guard into Moody’s preparation? This is where Maczik finally gets the timing on this and he disengages over the top of Moody’s blade and manages to hit him in the body as he’s coming forward with an attack in preparation. 4-3 Maczik.

Moody begins to push Maczik slowly, breaking distance with the hope that Maczik will pursue, but he’s not biting. Moody attempts the fleche once again and Maczik catches him in six and hits him over the top of the arm once again. 5-3 Maczik.

With 54 seconds left, Moody backs away with his arm down hoping Maczik will do the same to draw non-combativity. Maczik backs away, and Moody changes his mind and decides to pursue. Once again, Maczik retreats to his end of the strip, and as Moody prepares with a sweeping eight with an attempt to finish in six, Maczik once again attacks into preparation for a single light. 6-3 Maczik.

Both athletes back away once again, and for a moment, Maczik seems to turn away from the strip which causes Moody to reengage in combat. Once again, Moody sweeps Maczik’s blade in preparation, but Maczik has the timing, and once again hits Moody with an attack in preparation. 7-3 Maczik.

The two break distance, salute with 27 seconds remaining in the first, and finally agree to non-combativity. End of the first period.

Maczik says to himself in the one-minute break “Hey! I think I’m onto something here!” after managing to hit Moody with four consecutive single lights with almost the same action. Moody comes off the line at a faster tempo once again, and Maczik goes on the retreat once again. Moody lunges to the foot and recovers forward ready in six, using his forward recovery to close the distance just a little bit more…

But Maczik pulls his arm back to avoid Moody’s six and hits Moody with infighting for a single light. 8-3 Maczik.

The same dog and pony show continues. Moody pushes fast, sweeping in eight in preparation, and Maczik retreats. You can guess what happens next. Over the top of the arm and into Moody’s prep for a single light for Maczik. 9-3 Maczik.

This time around, Maczik doesn’t even wait for Moody’s sweep in prep and within seconds, times his attack in preparation solely by Moody’s movement. 10-3 Maczik.

Somebody in the audience says “holy crap.” Finally, Moody changes the tempo and does a deceptive lunge with redoublement that begins with an initial speedy lunge, yet Moody decelerates the second and finishes the action catching Maczik off guard who had timed his parry riposte based on the initial lunge’s speed. Single light, Moody. 10-4.

Maczik goes with doubling out to finish the bout, and attacks into Moody’s prep once again for a double touch. 13-6.

Moody finally begins to move in and out of the distance, pressing Maczik and then moving out and breaking. But as he reengages distance and presses Maczik…over the arm and into the prep, to grandmother’s house we go for a double touch. 14-7.

Moody comes off the line quickly once again, and Maczik goes into his prep…again. 15-7, bout.

Overall Notes: Including the time shaved off for non-combativity in the first period, this bout lasted a grand total of 202 seconds. Including double touches, a total of 18 unique touches occurred, which means that each touch lasted on average 11.2 seconds– a very quickly fenced bout.

Maczik excellently demonstrated the concept of luring an opponent into one’s “Area of Excellence,” or AOE. Sometimes in fencing, less is more. Rather than playing a physical, high movement game that ended in lunges or fleches (Maczik, by my count lunged once or twice the entire bout), Maczik chose to play a game of timing, luring Moody to his end of the strip and timing his attacks in preparation to perfection. Congrats to Adam Maczik on his win.