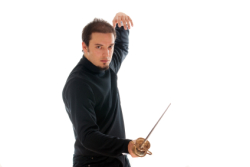 Modern fencers are lacking in control, are often off balance, prone to injury, and generally a disgrace to the practice of fencing.

That is the position forwarded by Nick Evangelista in an article written in Fencers Quarterly and in one section of his book “The Art and Science of Fencing“.

Mr. Evangelista and his view of “classical” vs. “modern” fencing is polarizing and always sure to generate debate, much like the arguments for and against the designated hitter in baseball.

Deconstructing the The Free Arm in the Art and Science of Fencing
Here, we look to deconstruct these essays to pick out the nuggets of truth and highlight the areas that are misinformed and need correction.


Michael Garrison provided the bulk of this article discussing Nick Evangelista’s views on the use of the non-weapon arm in modern fencing. We’ll take a point/counter-point approach to the arguments put forth.

Evangalista: “Since classical form was developed in an age when men still fought to the death with sharp swords, we might say that ideal form would, by necessity, be that which insured a good chance of survival in an aggressive combat situation. Being able to hit the opponent, say, without being hit would be a critical issue, since a tie with deadly weapons would not be good. There would be nothing fanciful, extraneous, or meaningless in one’s form, for these attributes would get someone killed very quickly.”

Garrison: Even if the underlying position that “bad form would get you killed, so only the best forms were created for classical fencing” were true, then why don’t the majority of Olympic fencers use this form? “In modern fencing, however,” says Michael Garrison, “we compete in a sport, not a death match. In our sport the pressure to win has replaced the pressure to kill, or survive, and if raising the rear arm offered a competitive advantage, why doesn’t anyone do it?

Looking more closely at the argument put forth, Evangelista shows photographic evidence of how holding the back arm down causes problems with form:

Evangalista claims that this photo is evidence of the bad form and sloppy fencing caused by holding the non-weapon arm down instead of up in the classical position.

One truth that can be agreed on is that bad fencers look bad when on video or photograph – that is true for both modern and classical fencers.

Getting past the obvious straw man argument, Evangalista proffers 4 points to back up his claim that fencers should fence with the rear arm elevated in the “classical” position:

The Free Arm as Counterweight:

NE: “[The free arm] keeps you upright, promoting a balanced position whereby your body weight remains distributed equally on both legs. This is a good thing for fencers who don’t want to fall down.

Holding the arm at a forty-five degree angle from your torso, keeps your body angled in relationship to your opponents, giving them as little straight-on target area as possible.”

MG: “The counter-balance argument is easily dismissed…just perform this simple test. Stand straight up. Place your feet shoulder-width apart, arm loose and falling from the shoulders. Relax and bend your knees slightly. Now, extend your right arm straight out from the shoulder with your hand pointing to your right. Did you fall over?”

NE: “When the bent arm is snapped straight back from our classical position, it adds to the acceleration of the lunge (“for every action there is an equal and opposite reaction”).

Once you are in the lunge, the straight arm held behind you, with the free hand held palm-up in supination, helps you to remain balanced. In simple language, it keeps your backside from sticking out. Then, when you come back on guard from the lunge, pulling the back arm up quickly aids in the recovery.”

Think of other sports where a sudden explosive action is required: sprinters on the blocks, basketball players in a jump-ball situation, a base runner ready to steal second, or a swimmer on the starting blocks. Using swimmers as an example: do they swing their arms from front to rear, or do they throw their arms out, forward, as their powerful legs snap open and propel them into the water?

Is fencing really so strange, in a classical physics sense, that to produce forward motion fencers must throw parts of their bodies backwards?”

It keeps the arm out of the way:

NE: “Keeping the free arm up when you are on guard keeps your arm out of the line of fire, as well. Consider this: fencers receive calls against them for “covering a valid target area” with the free arm — this simply could not happen if the arm was held correctly behind them. ”

The rear arm acts as a rudder to direct the lunge:

NE: “…your back arm serves as a rudder, like the steering pole on the rear of a boat. If you use it properly, it will steer you straight ahead, enhancing your point control.”

MG: “The ‘steering rudder’ analogy breaks down for lack of a resisting medium. As a means of steering, a boat’s rudder applies force against the water in the opposite direction you desire the boat to travel. In this case water acts as the medium against which the rudder resists…For the fencer’s rear arm to act in this manner, it too would need a medium against which it applied force. While the fencer’s rear arm is moving through the air, the resistance provided by the air against the arm is insignificant.”

“The rear arm as the second type of rudder, a counter balancing or ‘mass rudder’ doesn’t work either. In this case the backward moving rear arm would need to be enormous if its movement were to have any counterbalancing action on the mass of the forward-moving body.”

What is Proper Form?

Finally, at the beginning of his article, Mr. Evangelista proposes that we look at the overall utility of an action to determine proper form:

“One might argue about what constitutes ‘proper’ form, but it’s clear that the best form would be one that produced a balanced, measured condition in a fencer, so that he or she often achieved an expected, successful result. Anyway, a sensible person might think that.”

So, if we view multiple highly successful individuals using a particular style, then we can agree that the style is one which meets the criteria above and can be successful.

We’ll look at a couple of matches, but our video section and YouTube are filled with additional examples of high level fencing.

Shanaeva is the 2009 World Champion for women’s foil and Vezzali is the most accomplished active fencer with three individual Olympic gold medals, five world titles and more than 60 World Cup tournament victories.

Both fencers have the ability to change direction quickly and Vezzali is particularly known for her broken-tempo footwork that allows her to take advantage of any mistake her opponents make while within fencing distance.

If you look at these fencers, they are well balanced and move well. Looking at their upper bodies, there is no extraneous movement and yet their back arms are relaxed and down by their sides, not held up in the “scorpion” pose favored in the classical texts.

Moving over to men’s foil, let’s take a look at Italy’s Andrea Baldini vs. Germany’s Kleibrink

Baldini is currently on a big win streak and the 2009 World Champion. Kleibrink is the reigning Olympic Gold Medalist in foil. Looking at their form, you can see the same balance and explosiveness exhibited in women’s foil.

Looking at their arms, they are held in a relaxed position to facilitate the overall fencer’s movement.

Does seeing these highly successful fencers invalidate classical fencing? In a word, no. First off, there is the inherent problem of nailing down what exactly is meant by “classical fencing”. No matter where in the timeline of pre-electrical fencing you put it, classical fencing is still a parent discipline to contemporary fencing.

MG offers up his own view: “The truth is that classical fencing is a wonderful, beautiful, supremely enjoyable activity, which indeed birthed modern fencing. However, like all children, modern fencing has gone its own way, and modern fencers have come to the realization that these two endeavors are just plain different.”

Have your own views? Discuss them here: The Art and Science of Fencing Article Discussion.