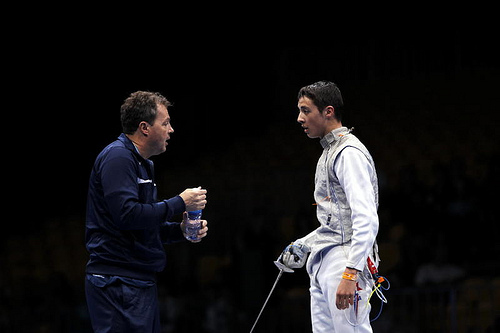 Being the coach’s son can be a challenge. Add the fact that your father is a three time Olympian and is the Olympic coach, and the challenge grows.

Being the coach’s son can be a challenge.  Now add the fact that your father is a three time Olympian and will be the Olympic coach in 2012, the challenged just got amplified.  Alex didn’t get there by nepotism – as the #2 ranked men’s foilist in both Jr. and Sr. points in the US and #14 in the world, he has certainly worked his way on the team.   Fencing.net caught up with Alex after his world cup in Seoul.

KM: How does it feel to be an Olympian?

It’s an honor to follow in my father’s footsteps!  He’s done it three times and is the Olympic coach so hopefully I can go out and get a medal for both of us!

It is a little strange now though.  After the big buildup of the announcement of the team in Virginia Beach, it’s been a bit quieter now.   It is now the grind and work of training to get to the Olympics.

I have been a bit distracted though since my mind has been on other things the last couple of days.  I just graduated!

KM: That’s got to be exciting!

Yeah!  I had to finish up all of my graduation stuff and try and do my training all at the same time!

KM: You must have done some intense training because you did well in Seoul.

Then later in the rounds, Race [Imboden] went on and beat me to get to the quarter finals.  He was on fire that day and went out and took a bronze!

KM: What was going through your head when you found out you had to face Gerek after the reseed?

It was tough, but we have to remember that fencing is an individual sport.  You have to make that separation in your head that even though he is a teammate, you have to face him and try your best and beat him.  I really try and keep that distance in my head when I have to fence teammates.

KM: It must happen even more with Gerek!

Yep!  I have to face him all the time!  He is one of my main training partners!

KM: Exactly!  Is it a bit strange to be training with him like this since the way you met him was your mom taught him piano lessons?

It’s a bit weird because growing up, we would play together and when I started out fencing, I really looked up to him.  I mean, I still do in certain ways, but now we are more peers.  It was a bit of a mental shift to move from looking up to him to moving to a peer level.

KM: What does it feel like to be one the youngest fencers on the team?

Yeah, Lee [Keifer] gets that honor of being the youngest!  She is two months younger than me!

Being younger it isn’t actually easier, it is a bit harder.  You have to go out and prove yourself to people who are older and stronger.  What I can say is that I have a huge work ethic in me to go and outwork them so that way my youth is now an asset.

You have to realize that the other person on the other side of the strip is your opponent, no matter who they are, and you have to do your best to go out and beat them.

KM: Your dad is a three time Olympian and the Men’s National Foil coach, your sister Sabrina is a top level women’s foilist and you are in the top 16 in the world; what is it like being in the Massialas household?  Is it just fencing all the time?

No, we are actually a very typical family for the most part!  Dad really tries to separate the two areas.  He really works on keeping the two very distinct.  When I’m on the strip, he is coach.  When he is at home, he is dad.

He really is one of the fairest coaches also.  Not many people can say that their coach is also their friend and dad and have a good relationship.

He will let you know when you are doing things wrong and when we need to work, but he is also good about telling you when you do well.  When we are at home, it would be an unfair advantage to my teammates to talk about fencing all the time, so he really keeps fencing stuff to the club.

KM: So what is it like for your mom?  She is kind of the odd one out.

Yeah, she is a bit!  She is super supportive though!  She never pushed either Sabrina or I to fence, she just let us choose.

KM: Did she try and get you to play piano?

Well, she did try a bit, but dad got to us first with fencing so there wasn’t any more time!  HA!

KM: Where are you going to school next year?

I’m super excited about going to Stanford!  It has a great program both in athletics and academics.
Also anyone who knows me knows I hate the cold!  So Stanford will be a great place for me!

KM: Pac-12!  You know the UW Huskies are going to beat you in football since you don’t have Andrew Luck any more.

We have a great recruiting class coming in so we’ll be OK!

KM: What are you doing to get ready for the Olympics now that we are about 50 days before the Olympics?

After Havana, we will have a national camp in Anaheim and we will be in two a day practices and making our final push.  I had a blog that I was doing for my senior project in high school which I’ll keep going as we approach the Olympics.  It is Massialastolondon.blogspot.com.

KM: So it will have all of the secret tales of what it is like to be on the road to the Olympics as well as inside secrets of being the son of the Men’s foil coach!

Video:Alex Massialas fencing against Benjamin Kleibrink (GER) at the 2010 World Championships in Paris