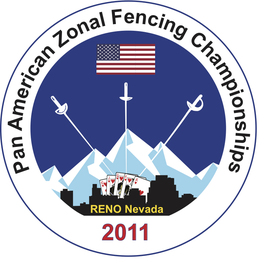 The US fencers swept medals in the Men’s Foil and Women’s Epee events as Race Imboden and Kelley Hurley won gold in their events at the 2011 Pan-American Zonal Fencing Championships.

In the semi-final bout, Gerek Meinhardt started out strong against Alex Massialas, building up a 7-2 lead.  Massialas adjusted to the timing of Meinhardt’s attacks and launched several successful counter-attacks which lead to a 6-0 run to gain an 8-7 lead.  Meinhardt responded with a 3-0 run of his own and then the fencers traded touches to close the first period with Meinhardt up 12-11.  Massialas started the second period strong with a 2-0 run and closed the bout out 15-13.

In the other semi-final bout Race Imboden was simply dominating.  He built up a 6-1 lead on Gomez and never let up the pressure, building to a 12-4 lead at the end of the first period.  Gomez used the minute break well and was able to go on a small run, but Imboden’s lead was insurmountable.  Even though Gomez outscored Imboden 6-3 in the second period, three touches were all that Race needed to close the bout, 15-10.

The Imboden-Massialas final was fenced before a standing-room only crowd at the Reno-Sparks Convention Center.  Imboden was on early in the bout building a 4-0 lead.  Massialas responded, chipping away at the lead to bring the bout within one touch as the fencers went into the minute break with Imboden up 9-8.  In the second period, Imboden imposed his will on the match, going 6-0 to win 15-8.

During the day, the only elimination losses by the US team were from team members.  In the quarter-finals Miles Chamley-Watson lost to Race Imboden, giving the US team 4 of the top 8 and 3 of the top 4.

In women’s epee, the story was much the same with a quater-final bout between Maya Lawrence and Courtney Hurley to determine who would go into the top-4.  The final four featured three Americans: Courtney Hurley, Kelley Hurley, and Lindsay Campbell plus Caterin Bravo-Aranguiz (CHI).

Courtney Hurley dominated the first semi-final opening up a 5-3 lead that included two double-touches.  Bravo-Aranguiz (CHI) fought back to tie the score at 6 but then was unable to keep up with Hurley as she build a 13-10 lead going into the second period.  After a double touch, Hurley finished off the bout to win 15-11.

In the second semi-final Lindsay Campbell won the first touch and proceeded to build a 5-2 lead at the end of the first period.  In the second period the fencers picked up the pace as Hurley pressed forward more and forcing ties at 7 through 11.  The third period was all Hurley’s as she scored two points to go up 13-11 and then closed the bout out with two double-touches to win 15-13.

The all-Hurley final started with Kelley building a 3-1 lead over Courtney.  The sisters fenced at a fast pace, but Kelley would score two to three touches for every point that Courtney put on the board and ended the first period up 13-8.  Courtney was able to put some more points on the board in the second period, but the lead was too great and Kelley won the bout 15-12.

These events provide valuable individual points for FIE rankings.  Because both Women’s Team Epee and Men’s Team Foil will be contested at the London Olympics, the team events later this week are far more important to the USA Fencing’s Olympic plans.  What the results from today did were to show that the US fencers are at a level to win those head-to-head match ups against the other countries and to establish their dominance in those match-ups heading into the team events.