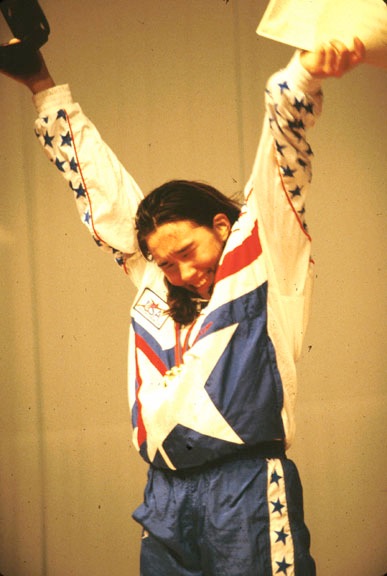 Iris Zimmerman became the first US fencer to win gold at a world championship in 1995. Photo: 1995. Carl Borack

Iris Zimmermann holds the distinction of being the first U.S. fencer in history to win a world championship in any weapon or any age category.  She earned this distinction in 1995, winning the World Under-17 Championships at her first major international event.   Four years later Iris would become the first US fencer to medal in the Senior World Championships, earning the bronze medal in women’s foil.

She and her sister Felicia formed a great fencing duo.  In that same year Felicia was the number one ranked Women’s Foil Fencer in FIE Junior World Cup Points.

Today US fencing fans take medals at the Cadet and Junior World Championships as a given.  We now don’t hope for a medal, but expect them and want to count up how many golds the US team takes in comparison to the traditional powers such as Italy, France, Germany, etc.

The efforts of fencers like Iris Zimmermann and others in her generation of US team members set the bar higher for future US teams.  In only 15 years the US fencing community has moved from being in awe of European fencing to looking at how the US matches up in every weapon.

Iris is still involved in fencing as the co-owner of the Rochester Fencing Center, where she began her fencing career, working to inspire and teach a new generation of fencers.

Andy Shaw (who runs the Museum of American Fencing) conducted an interview with Iris at the 2010 USA Fencing National Championships:

Other media mentions for Iris: