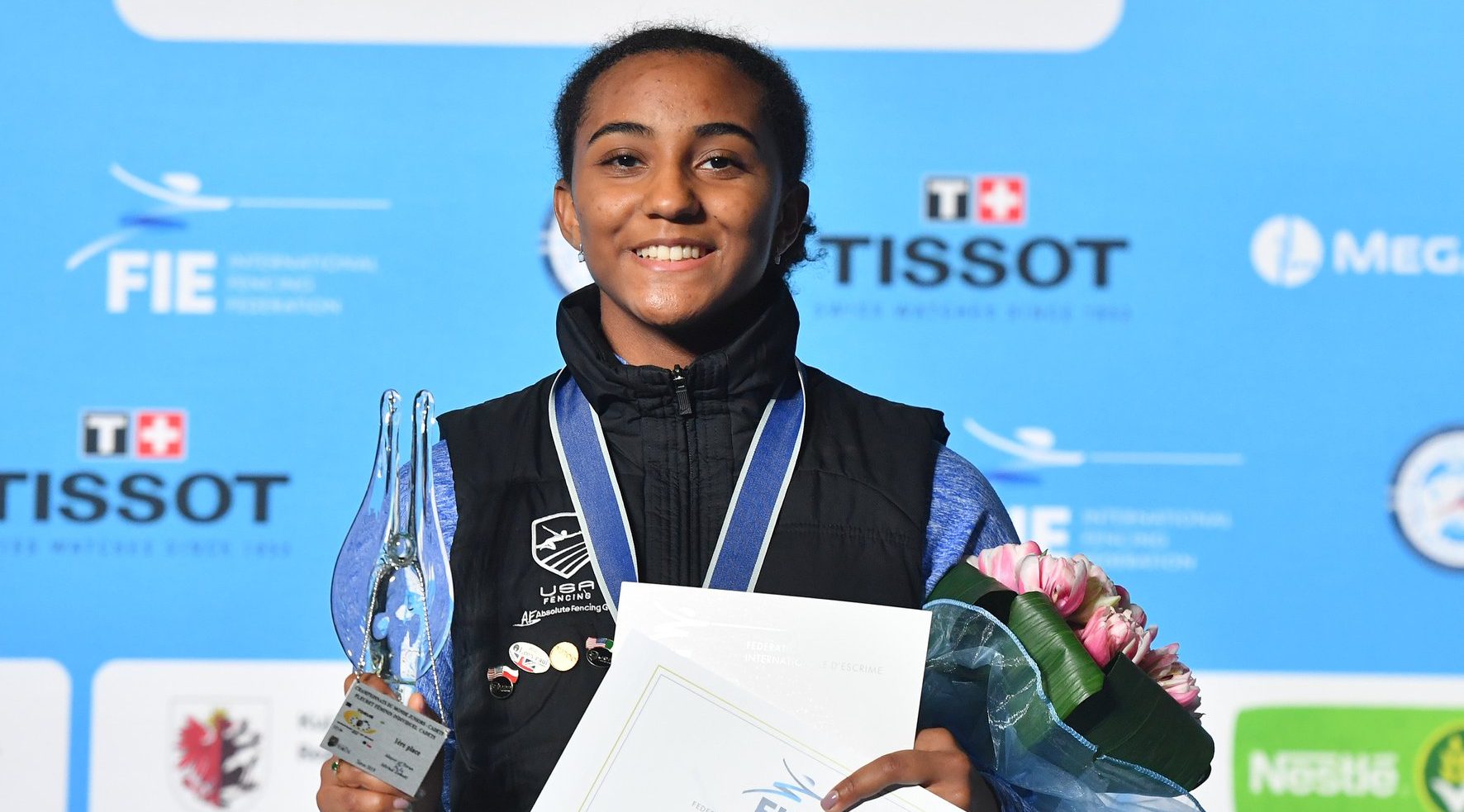 Qualifying for both competitions, her two victories in successive days makes her the only U.S. foil fencer in history to have won both titles at the same championships. She joins U.S. Olympians Mariel Zagunis, who did it in the sabre in 2001, and fellow sabreist Rebecca Ward, who achieved the feat in 2006, as world champions in two age categories. Zagunis went on to win two Olympic gold’s in 2004 and 2008, while Ward won the senior championship the same year and an Olympic bronze in Beijing. The last foil fencer to have achieved the double was Aida Mohamed from Hungary in 1992.

“It’s kind of surreal,” Scruggs told USA Fencing after her win in cadet. She beat Sein Hong of Korea, 15-9.

Her victory in juniors the previous day, on day five of nine in Torun, came against Italy’s Martina Favaretto, 15-13. Earlier, in the quarterfinals, she had upset world number six Leonie Ebert from Germany, 15-12.

“I still can’t believe that I won yesterday and this victory now…I can’t process it,” she said. “It feels amazing to win both gold’s at World Championships. It just shows that my hard work has paid off.”

Far from being tired after day five, on day six in the cadet category, Scruggs gave up only four touches to take the top seeding out of pools. Then, former USA representative Nicole Pustilnik (now of Israel) pushed her to the brink in the table of 16. Pustilnik even lead 14-9 at one stage of the third period, before Scruggs scored the first of five touches with only 24 seconds left on the clock. The final touch came after Scruggs ran at her opponent with 4.9 seconds left, making it count with 0.03 seconds left and push the bout into overtime. After she completed the final, winning touch, to take the bout 15-14, her teammates roared in jubilation.

“I’m someone who feeds off that energy, so to have them out there is just amazing. It means a lot to me,” Scruggs explained.

After advancing to the quarter and then semifinals, she took on Hong from Korea and after pulling away 9-6 in the second period, was never likely to lose.

“I just wanted to fence how I usually fence, to be honest,” she explained. “For the first part of the day, I was feeling really sluggish and tired, and was really having to strain to get into my super beast mode, but the last couple of bouts I just pulled it together.”

The following day she fenced for a third gold in the team event with teammates Sylvie Binder, Delphine DeVore and May Tieu, but they faltered after the round of 16 and could only mage seventh, going down to Japan, 43-39, in the table of eight.