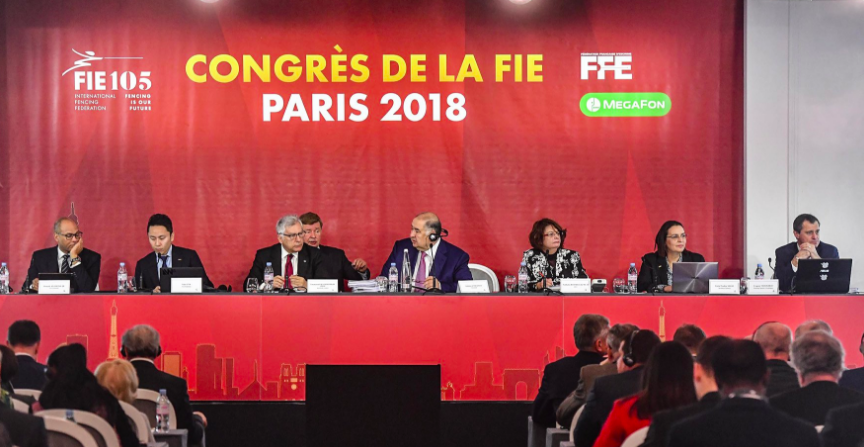 With a theme of “Fencing is our Future”, FIE President Alisher Usmanov, opened the two-day conference in Paris by confirming that all twelve disciplines of fencing would be part of the next Olympic program. Considering this to be one of the most important achievements in the sport’s history, he also recognized the need to find new ways to promote the sport, incorporate technology better and improve the level of access to fencing worldwide.

Significantly, as is the charter of the 135 member federation, 84 total rule changes were considered and decided upon. Among these, two that had caused healthy debate in the lead up to the meeting were executive proposals 4 and 5, concerning the removal of the off-target light in foil and the partial reinstating of the fleche attack in sabre.

In both cases, the proposals were withdrawn but slated for testing to take place at upcoming Junior World Cup events regardless, the next of which in the sabre and foil are scheduled for the weekend of the 5th of January in Udine, Italy and Budapest, Hungary, respectively.

In the case of rule change proposal 4, the removal of the off-target or invalid hit light in foil, neither of the Athletes Commission, Refereeing Commission or the Coaches Council were in favor of the change. In the publicly available minutes of the meeting, the Athletes Commission felt that ‘eliminating the white light would completely change the basic idea of foil fencing.’

The Coaches Council, although not in favour, said that before a decision was made, ‘testing during training and competitions be done. FIE should provide top world countries with modified scoring machines in order to investigate possible outcomes of the rule changes.’

In it’s ruling, the Executive Committee proposed that testing during junior World Cup events, both in individual and team competitions, should take place over each of the next two seasons and the conclusions presented at the 2020 Congress.

The Rules Commission was slightly more aggressive, asking that it be tested at a satellite event during the 2018/19 season and if conclusive presented at the 2019 Congress.

The Fleche Attack in Sabre

With regard to the partial reinstatement of the fleche attack in sabre, once considered to be one of the most spectacular forms of fencing, it was acknowledged that its previous elimination had greatly reduced sabre’s visual appeal.

Nevertheless, it was still withdrawn albeit with testing recommended at up to 4 junior World Cup events, both team and individual, over the next two seasons by the Executive Committee. The Coaches Council was the only voting body in favour of the proposal with the caveat that ‘the proposal for sabre be carefully worded and tested to avoid running on the piste.’

Testing has already begun on this rule at this weekend’s Dormagen Junior World Cup. Sydney Saber, purveyor of high quality videos on the topic of modern sabre, posted some video of the tests which are being overseen by Yevgeny Tsukhlo:

Additionally, a partial video of the seminar on the topic at the same event can be found here.

There were also modifications made to rules concerning the placement of advertising logos on fencing equipment, with the Executive Committee sharing the view of the Rules Commission that a maximum of nine logos be on display at any one time, though not on the front of the fencing jacket, plus one no larger than 30cm2 on the glove, adding up to ten in total.

There was also proposals made by both the Athletes and Refereeing Commission regarding non-combativity, with each party agreeing in principle that harsher penalties should be applied to fencers who display an unwillingness to fight. The Athlete Commission entry (#3) won the contest of competing proposals. The upcoming change will involve using a separate timer to track non-comabitiviy, and a special class of red cards that can lead to a black card.

World number one ranked teams and individuals were also awarded on the gala night to conclude proceedings. This year’s recipient’s were as follows: