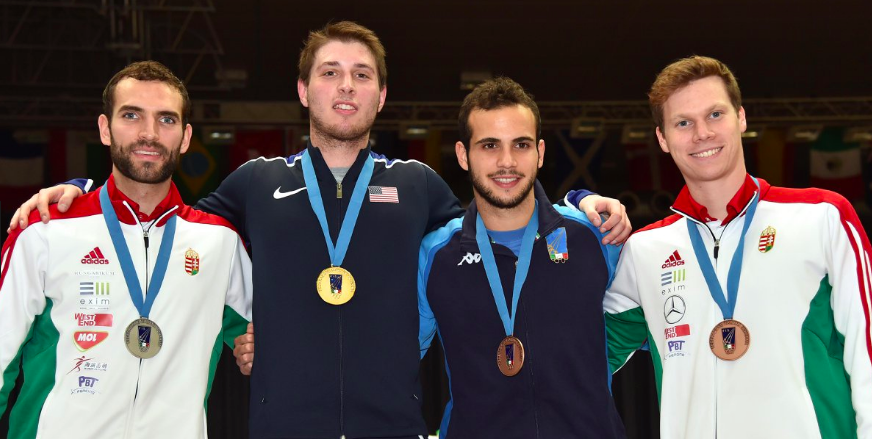 FN: Hello Eli, thanks for talking to fencing.net. Congratulations on a great season! How would you describe it?
ED: This season has been amazing. I really feel like all the hard work I have put in over the last few years is showing on the strip, as I won two World Cups this year (Algeria and Italy), got bronze at a Grand Prix (Korea) and also made the top 8 at three other World Cups.

FN: Nice. The Pan-Americans, which you’ve won twice before and were runner-up at last year in Montreal, are just around the corner. After that you go to China followed by the Worlds in July. How do you prepare for these events and how important are they too you?
ED: My preparation for the upcoming tournaments is just to work as hard as I can in the upcoming weeks. since I am done with school for the year, I have more time to dedicate to training than I have had for the last few months. The tournament is extremely important to me because in 2013, the Pan American Championships in Cartagena (Dershwitz finished 14th) was the first opportunity I had to be at a tournament with the entire US Senior Team. I remember thinking how amazing it was to compete next to so many World and Olympic medallists.

FN: How are these types of events different from the Grand Prix and World Cup events? Is the atmosphere more intense and how do you handle it?
ED: Pan-Ams and Worlds are both different from the World Cups and Grand Prix’s because of the atmosphere at the tournaments. There is so much more emotion in the room that the tournaments take on a much more competitive edge, especially since Pan-Ams is the last tournament before the World Championships. I handle it by just continuously telling myself how hard I have worked to get there, and that the only thing left to do is to compete to the best of my ability

FN: Who do you see as your main rivals going into both of these competitions?
ED: I see my main rivals as everyone else in the room, so I don’t underestimate anyone. By giving every opponent I face that respect, I am able to compete to the best of my ability against everyone.

FN: Earlier in the year you created history by becoming the first Harvard fencer to win back-to-back sabre champion at the NCAA finals. How did that feel?
ED: In college fencing, it felt amazing to win my 2nd straight NCAA Title, as NCAA fencing is the only time I get to compete for a team goal in an individual competition. By training with the Harvard team all year, the end result of a championship is all the more rewarding since it is something I can share with all of my teammates.

FN: How do you rate Team USA’s chances of gold at the World Championships?
Editor’s Note: A quick reminder here that Eli talked to us right before World Championships
ED: World Cup team events are always a tough time, since they are after two days of individual competition, everyone is tired and sore, so it takes a great amount of discipline and a positive attitude to get the entire team fired up for the competition. I feel that our chances going into China are very promising since we have several team members who have been fencing at an extremely high level in recent competitions, so all that we need to do is come together and fence well as a unit.

FN: Finally Eli, is your ultimate aim Olympic Gold?
ED: My ultimate goal is an Olympic medal. Every countless hour that I have spent over the past several years dedicating myself to every aspect and every detail of this sport has been with the goal of someday winning one at the front of my mind.