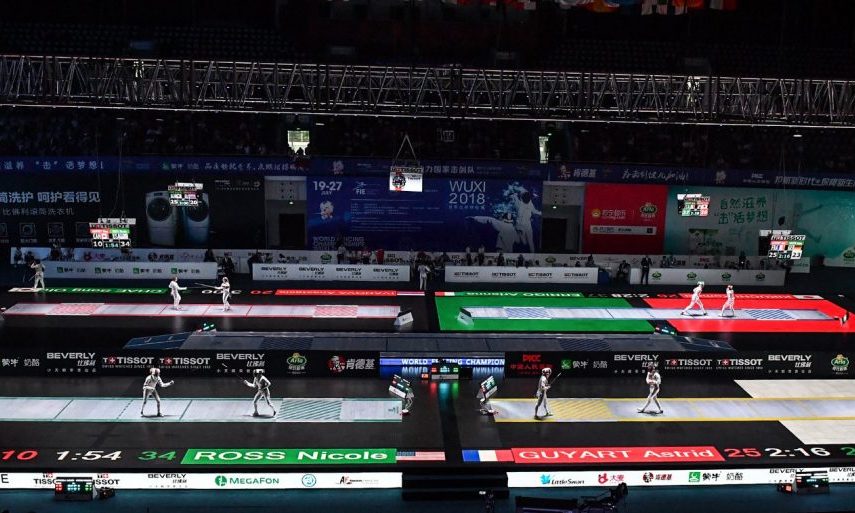 By winning silver in the men’s team foil on the final day of competition on Friday, this years U.S fencing team surpassed it’s previous best result at a world championship achieved in 2015, when it won five medals – four individual and one team – by winning six medals in total.

Setting this year’s effort apart from that result is the fact that this time, of the six medals won, two are gold. Both came in women’s team’s events – the foil and epee – and both for the first time by the United States at this level.

The tally also marks a huge improvement on last years championships in Leipzig, Germany where the team won two medals – both silver – one by the exact same men’s foil team, who were unable to improve on their result against the same Italian opposition this year despite winning every other team event this season. And the other by the exact same women’s foil team, who went one better than their performance in China – also against Italy – taking gold in the event for the first time ever.

Despite their defeat at the hands of Italy, Race Imboden, who came into these championships ranked the number one foil fencer in the world, summed up the mood on his Instagram account under a picture of himself and his teammates: ‘SILVER at World Championships. We used to be underdogs. No longer. Hell of a season with these boys, Hell of a journey to get here.’

SILVER at World Championships. We used to be underdogs. No Longer. Hell of a season with these boys, Hell of a journey to get here.

At an individual level, Eli Dershwitz won silver in the sabre – his first senior world championship medal – to continue his rise from 2015 junior world champion and 19th on Olympic debut in Rio, to his current status as the world number one.

SILVER MEDAL AT THE 2018 WORLD CHAMPIONSHIPS IN WUXI, CHINA AND OFFICIALLY THE #1 RANKED MEN'S SABER FENCER IN THE WORLD. A huge thank you to my family, friends, coach, and everyone else who helped me reach this point, and congratulations to the other medalists! 📸:@augusto280766 #Wuxi2018 #WorldChamps #USFencing #TeamUSA #Tokyo2020 #GoingForGold

I hardly have the words to express how I feel! Yesterday I made history with winning the first medal 🥉 for US women’s epee at the World Championships. Achieving this alone was amazing but more importantly, to myself, how I accomplished this was a greater story. This season was the hardest season for me. Fencing is a complicated sport and almost entirely my problem this year was mental. This year made me seriously question retiring from the sport of fencing. All this hardship, sadness and frustration went completely out the window when I fenced yesterday. I was happy, calm and I never became emotional (even when I was down 13-8). This accomplishment in itself was amazing. I also want to thank my sister @thishurleygurrl for always being there to support me even in my crazy moments. I would not be here without her support and of my parents constant support. I’m just so happy!! 😁😁 Tomorrow is team event and I’m even more excited to get back on that podium because I believe my team can do it!

Pulling off a surprise was sabre fencer Anne-Elizabeth Stone, who an individual bronze. Stone had come to these championships ranked only fourth in the U.S and having not made it past the round of 16 in three previous world championship appearances. After being overlooked for the Rio Olympics, her world ranking has risen to number 12.

Overall, it was Italy who again showed their dominance of world fencing, leading the medal tally with 4 gold, 2 silvers and 1 bronze. Their 4 gold’s included both the men’s and women’s individual foil, making first time world champion Alessio Foconi arguably the fencer of the meet after the Italian also lead his team to the men’s team event. South Korea had their own claim on that title, however, with 7 medals overall, including gold in both the men’s individual and team sabre, lead by individual champion Kim Junghwan.

France claimed two gold, including one on the last day when they won the women’s tem sabre, while Russia would be disappointed in their results, winning only one gold, one silver and four bronze as their Olympic and world champion foilist, Inna Deriglazova went missing, failing to even medal after dominating the event for so long. That said, such is their depth that they still enjoyed a clean sweep of the women’s sabre, going 1-2-3 in that event on day 6.