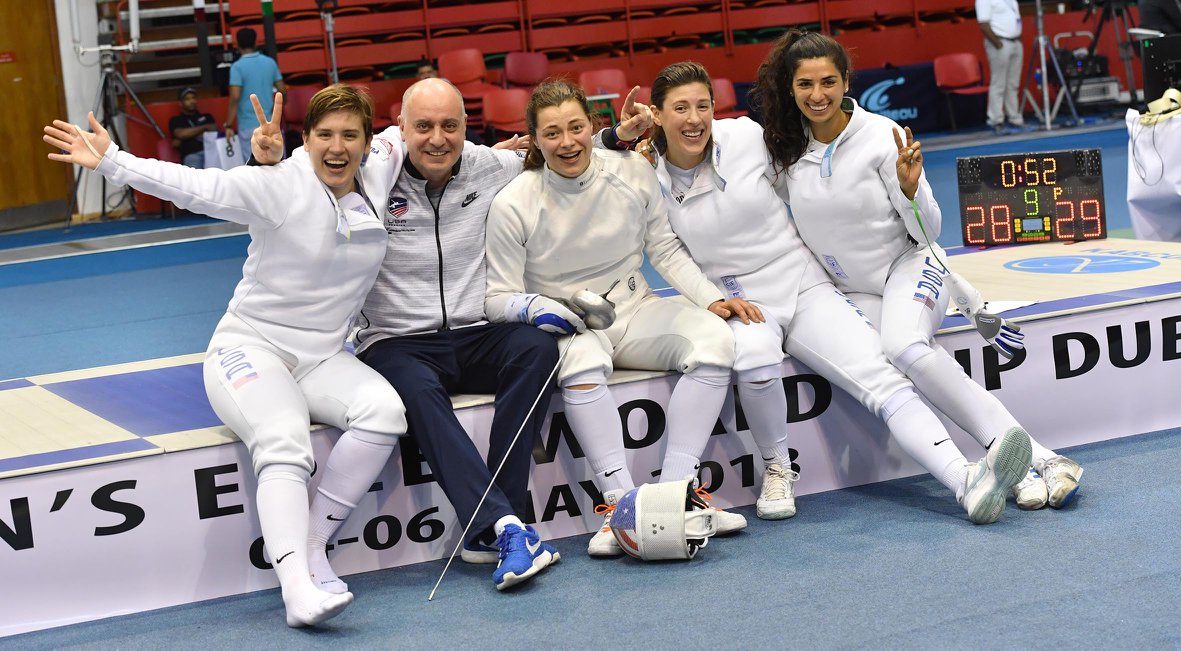 Team USA’s Women’s Epee squad took home the first team event gold medal in the history of the program. The team, comprised of Courney Hurley, Kelly Hurley, Katharine Holmes and Natalie Vie, won a narrow 29-28 victory over Russia in overtime to seal their victory. The final overtime touch is below (Holmes had priority):

The Women’s Epee squad won their place in the final bout by defeating France in the semi-final bout 42-36.

The squad has been coming into its own over the last year, with a bronze medal at the last Women’s Epee World Cup in Barcelona and a steadily improving overall record.

In the individual event, world #8 Yiwen Sun had a dominant 15-9 victory over #55 Laurence Epee to solidify gold. Epee (the fencer) defeated Violetta Kolobkova, world #11 and a member of the team silver medal Russian squad, 15-11. And Sun defeated world #14 Injeong Choi of Korea to make it to the gold medal bout from her side of the tree. This is Sun’s fourth World Cup career gold medal, which is more than the world #2 and #3 combined, showing a strong level of consistency on the international scene despite her relatively young age.

In Russia, Team USA took home their 5th consecutive World Cup gold medal this season – the first time in history for any men’s team in any weapon to sweep all 5 gold medals in all 5 possible World Cups in a single season.

The team, comprised of Alex Massialas, Race Imboden, Miles Chamley-Watson, and Gerek Meinhardt, has been on a tear this season after being barely edged out in last year’s World Championships event, where they placed second. The only event left is the World Championships Men’s Foil Team Event on July 26/27 in Wuxi, China. A gold medal there would be a crown jewel to their already historic run.

In this event, they soundly defeated Italy 45-25 for the gold after defeating Russia, the currently reigning Olympic champions, 45-38 in the closest match of the day.

In the individual event, Maxime Pauty took a surprise gold medal after going into the event ranked #94 in the world. His fencing career was stronger in the past, with several World Cup medals up until and including 2012, where he has not placed in the top 8 of any World Cup or Grand Prix until this event. Pauty defeated world #2 Alessio Foconi in a dominant 15-7 gold medal bout and defeated world #61 Kwanghyun Lee 15-9 to reach the final bout. Lee has also had some historically good results, but was also an unexpected presence in the medal rounds in this event. Foconi defeated world #13 Alexey Cheremisinov to make the gold medal match, himself.

Editorial Note: Originally this article mistakenly stated that this was the first team of any weapon or gender to win 5 world cups in one season. This is incorrect; it is only a first for men’s team events. Italy Women’s Foil has swept 5 World Cup wins in the 2008, 2013 and 2017 seasons.