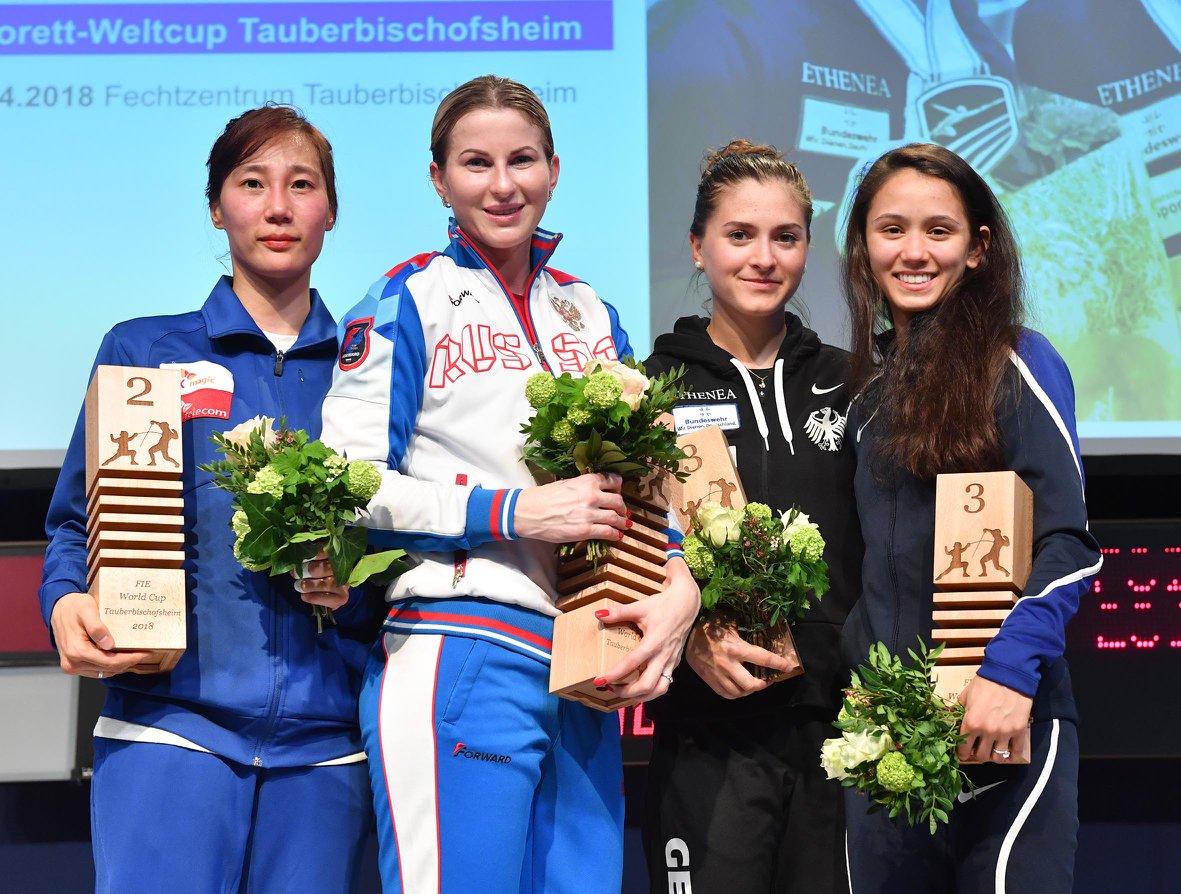 Despite a high-class field of over 150 fencers, including the entirety of the world’s top ten, Deriglazova was rarely troubled on her way to the final, where she narrowly out-touched Korea’s world number 11, Hee Sook Jeon, 13-12 to clinch the Reinhold-Würth Cup.

USA’s Lee Kiefer, who won the event last year, shared bronze with Germany’s 18-year-old Leonie Ebert, who notably beat world number two, Italian Alice Volpi, 15-12 in the table of 16. Her other highly-ranked teammate, Arianna Errigo, also went out in the early stages of the competition, upset by Ukraine’s Kateryna Chentsova in the round of 64, as was 7th ranked German Anne Sauer, the other local hope, who was beaten by 58th ranked Italian, Elisa Vardaro, at the same stage.

The competition was all about the class of Deriglazova however, who confirmed her status as the world’s best female foilist, following up her Grand Prix victory in Los Angeles last month with another powerful display here.

Inside the famed Tauberbischofsheim Fencing Club, she waltzed through her table of 16 clash with Hungary’s Anna Szantay (15-5), dominated the recently crowned world junior and cadet champion Yuka Ueno from Japan (15-8) and was too good for China’s Xingxin Huo, who she beat by the same scoreline. She then went on to beat her teammate Svetlana Tripapina (15-4) to advance to the semi-final against Kiefer.

The match-up was a repeat of last year’s semi-final at the same event, with the result going the way of the Russian this time, making it nine wins from 13 against the American, and leading fans on social media to announce the ‘Age of Inna.’

Her opponent in the final, Jeon from Korea, had earlier beaten France’s world number 4, Ysaora Thibus, in a close quarterfinal (14-13) before THE victory against hometown hero Ebert (15-12), who fences for the Tauberbischofsheim club, put her into the decider against the Russian number one.

In the team event, Russia dominated, beating an Italian trio which contained two of the world’s top five, 45-36 in the final, on the strength of three commanding victories by Deriglazova, who finished with a touch ratio of +11.

Team USA was once again the victims of Russian precision at the semi-final stage, going down 45-37, although it must be noted they were without their top-ranked fencer Kiefer, who did not compete in the team event in Germany. Italy had earlier beaten France 45-34 in the other semi-final, another repeat of last year, but was unable to defend the title they won then, going down to the team of Deriglazova, Tripapina and Zagidullina in the final.