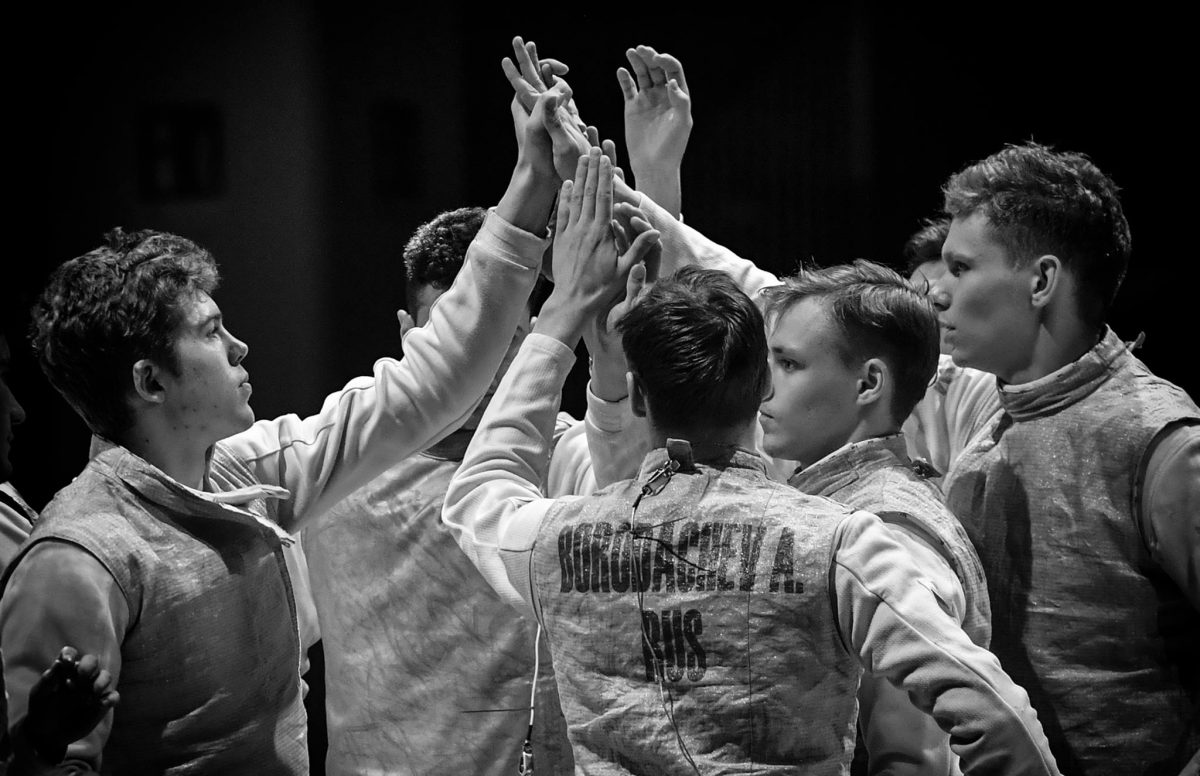 Heavyweights Russia and USA have closed out nine days of competition at the World Junior and Cadet Fencing Championships in Verona, Italy by winning gold in the men’s and women’s junior team foil on Monday.

Dominating France 45-26 to claim the final gold medal of the championships, the men’s junior foil victory wrapped a successful week-and-a-half for the Russians, who came in third in overall medal count with three gold medals and six in total across eighteen individual and team events.

USA and Italy were first and second place in the medal counts respectively, with a total of 14 and 13. In the end, the USA just edged out Italy by a single silver medal.

Down 37-39 before the final bout, Russia’s Kirill Borodachev produced the performance of his life to defeat Geoffrey Tourette 8 touches to 5, and propel his team into the gold medal match.

Earlier in the day they had outclassed Argentina and Chinese Taipei, before knocking out hosts Italy in a seesawing quarterfinal. Eventually winning it 45 touches to 39, they were again driven by Borodachev, who achieved an indicator of +10, much to the disappointment of the home fans.

In the final they were too good for France, winning 8 out of the 9 bouts to claim victory 45-26, and were ably lead by the experienced Grigoriy Semenyuk, who achieved an indicator of +11 in the final.

France enjoyed a slightly easier run to the decider, beating Japan (45-35) in their semi and Great Britain (45-30) in their quarterfinal, but did announce themselves by trouncing a disappointing Korea, 45-19 in the table of 16. Pierre Loisel was the standout performer in this match, achieving an indicator of +11 from his three bouts.

In the women’s competition, it was Singapore who played giant-killer on their way to the final, upsetting fourth-seeds Poland (45-39), fifth-seeds France (45-42) and finally eighth-seeded Germany (45-43) in a dramatic come-from- behind win.

In the final against USA, they went down valiantly 45 touches to 30, coming up against a new generation of Team USA cadets in Tieu May and Delphine Devore, individual silver and bronze medalists in the cadet competition the previous day, who both ended up with indicators of +9 in the final.

While the result confirmed USA’s number one junior world ranking in the women’s foil, and heralded a new era in a discipline recently dominated by Poland, it was another positive result at world championship-level for the tiny island-state of Singapore.

“I would definitely say we exceeded expectations,” said Amita, who US fans can look forward to fencing for Notre Dame University when she begins school there in September. “We were ranked 13th , so we were just focusing on getting into the top eight. We focused on one match at a time, gave our best and fought hard, and that was what took us to the final.”

Winning USA anchor Sylvie Binder, who played a vital role in advancing the team to the medal rounds by defeating Russia’s Alexandra Sundchukova 7-3 in the final bout of their quarter-final (with scores tied at 32 each), spoke about the enthusiasm of her younger teammates. “It’s amazing because coming out to the team event and watching them fence and watching them fence cadet, it was really awesome for me to see how hyped they were and how excited they were for the team competition,” she said.

“Seeing it all come together by the end of the day and winning the gold medal was really nice.”

Prior to Monday’s team events, the men’s and women’s cadet (U17) and junior (U20) foil had been contested over the weekend.

In the men’s cadet on Sunday, USA took a clean sweep, with Kenji Bravo defeating teammate Marcelos Olivares 15-11 in the final. Along the way Bravo beat Poland’s Maciej Bem 15-8 in his semi, while Olivares defeated Mexico’s Diego Cervante, 15-9.

In the women’s cadet, Japan’s Yuka Ueno staked her claim as the championship’s most outstanding fencer, winning her second individual gold in two days by defeating USA’s May Tieu 14-7 in the final.

The day before, Ueno had upset Italian hometown favourite Martina Favaretto by 15 touches to 14 to win the junior competition. Cadet fencer’s are allowed to ‘fence up’ at these championships and compete in team events.

On the way to the junior title, the 16-year- old beat France’s Eva Lacheray 15-12 in the first semi, while Favaretto defeated Tieu’s USA teammate Lauren Scruggs 15-11 in theirs.

Tieu had to beat her own teammate Delpine Devore (15-8) to reach the final against the Japanese prodigy, who was gifted her second gold medal match in as many days when her Italian opponent from Saturday’s junior final, Favaretto, was forced to withdraw on medical grounds.

Overall, the diminutive Ueno had to beat a number of high class opponents to secure both of her victories, including Team USA anchor Sylvie Binder, Singapore’s Amita Berthier and the highly fancied hometown favourite Favaretto, who was unlucky to become injured during the competition.

The Japanese right-hander remains an exciting prospect in foil fencing, and will look to build on her form when she competes at the upcoming World Cup event in Tauberbischofsheim, Germany, beginning April 27.

Big congrats to the medalists of cadet women's and men's foil for their amazing fencing today! #fencing #Verona2018 @fencingverona2018

In the men’s junior competition, another Italian, Tommaso Marini, experienced disappointment on home soil when USA’s Nick Itkin won their final 15-11. Marini had beaten Russia’s Grigoriy Semenyuk 15-10 in their semi-final, while Itkin had edged teammate Sidarth Kumbla 14-13 in theirs – one of several bittersweet victories for the Americans over the weekend.

Cruising through his pool, Itkin, who won team gold in 2017 and had already defeated another teammate, Geoffey Tourette, 15-12 in the table of 16, spoke about what he described as an ‘insane’ semi-final bout with Kumbla, and his overall victory at the end of day seven of the championships.

“It’s unbelievable. This is something I’ve dreamed of for a while,” he said. “I’m insanely excited right now. I feel really good.”

@nick_itkin for the gold medal of men's foil #Verona2018

Facing up to teammate Kumbla in an intense semi-final, Itkin said he was happy with how he was able to manage the pressure.

“We had an insane bout. I’m glad that we got to share the podium,” he said. ”I think in the beginning I was rushing it a lot, but at the end I started slowing down and thinking more about my touches instead of just rushing.”

“I just wanted to stay confident. I felt like I could win from the beginning, so I just kept that going in my head the whole day.”

See the full list of winners from the 2018 Junior and Cadet World Championships here. The event took place from April 1-9 in Verona, Italy.