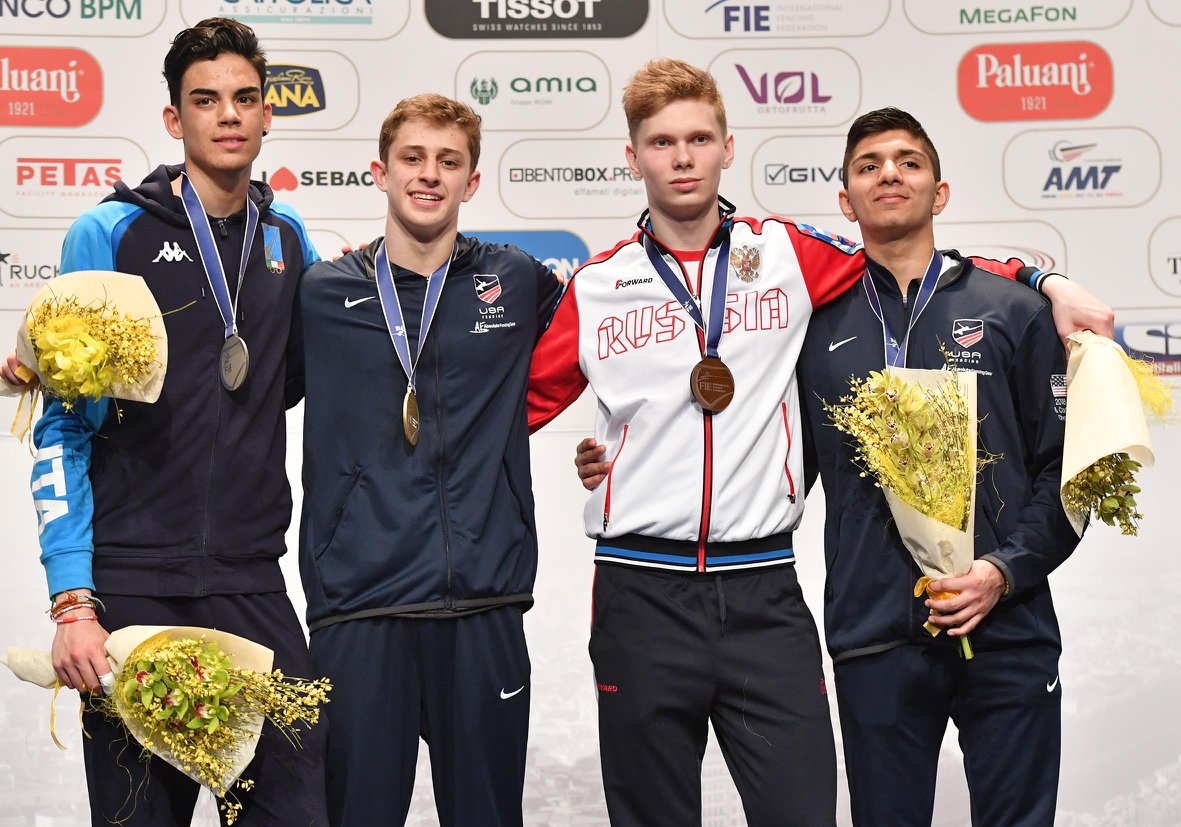 Nick Itkin leads Team USA with a gold medal in the Junior Men’s Foil event, which was followed up by a Gold medal for Kenji Bravo in the Cadet Men’s Foil and a gold for the Junior Women’s Foil Team at the 2018 Junior and Cadet Fencing World Championships in Verona, Italy.

Editor’s Note: This was last updated April 10th upon the conclusion of the tournament.

Itkin, ranked number three on the FIE Junior points list, defeated world number one Tommaso Marini. Itkin took an early lead and while the bout was competitive, he remained in control throughout. This makes Itkin the second American ever to win a Junior Men’s Foil World Championship title – only Olympian Alex Massialas has done it before.

The final touch of Itkin vs Marini

Teammate Sidarth Kumbla earned Bronze in the same event, losing a nail-biting 15-14 bout in overtime to Iktin in the semi-final round. Geoffrey Tourette also fell to teammate Itkin in the top 16, 15-12, while Sam Moelis also fell in the top 16, upset 13-15 to Kentna Suzumara of Japan.

Bravo, ranked number 11 in the FIE Junior points list, opted to not fence in the Junior event to instead focus on the Cadet event, giving his spot to teammate Sam Moelis. The plan worked out well for him, as he defeated Diego Cervantes of Mexico 15-9 in the semi-final bout and teammate Marcello Olivarias 15-11 for the championship title. Olivarias defeated Maciej Bem of Poland fairly handily with a 15-8 bout to make it to the gold medal bout himself.

The final touch of Olivarias vs Bravo

Team USA’s World Championship winning Junior Women’s Foil team consisted of May Tieu, Sylvie Binder, Lauren Scruggs, and Delphine Devore, who all did well in the events of previous days. As a team, they dominated the weekend with no truly close bouts the entire time. USA entered the event as the third seeded team overall, first defeating Hong Kong 44-31; then #6 seed Russia 39-35 in perhaps the tightest match the event for them; then #7 seed Italy, whose individual fencers are a bit stronger than their team seeding lets on, 45-36; and then defeating Singapore 45-30 for Gold. Worth nothing that Singapore was on a particular hot streak all day, coming in at #13 seed and knocking off a number of strong teams to make the final round, but was stopped by an experienced and deep Team USA.

The final touch of USA vs Singapore

The rest of Team USA also put up a strong showing:

This brings the US to a first place finish in the overall medal count with 3 Golds, 5 Silvers, and 6 Bronzes, just one Silver medal ahead of second place Italy. Russia rounded out the top 3 with a 2/1/3 count.