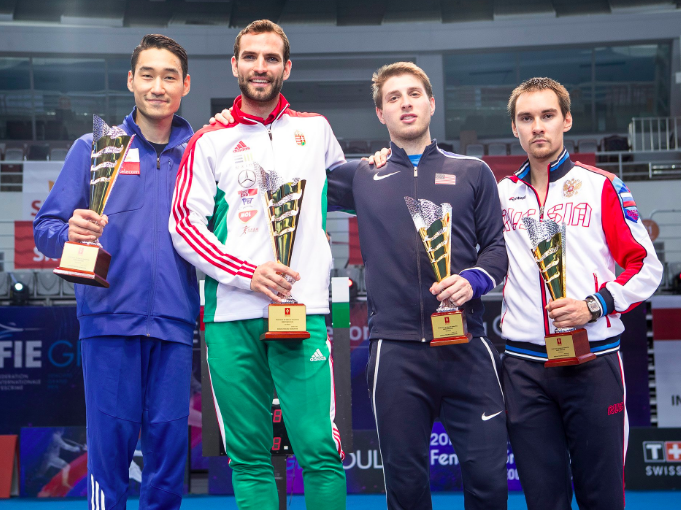 Top-ranked sabre fencers Aron Szilagyi from Hungary and Ukraine’s Olga Kharlan have won gold at the 2018 SK Telecom Sabre Grand Prix in Seoul, Korea. Just under 300 international fencers took part in the FIE event, which was held at the site of the 1988 Seoul Summer Olympics, and is the sixth of nine fixtures in the International Fencing Federation’s 2017-18 season.

In the men’s competition, Szilagyi easily accounted for hometown surprise packet Junghwan Kim, 15 touches to 7 in the final. This was after the Korean had beaten Team USA Olympian Eli Dershwitz in the semi, the American world number three fresh from his repeat success at the recent NCAA Championships.

Two-time Olympic gold-medalist Szilagyi beat Russia’s Kamil Ibragimov 15-8 in his semi, having been taken to the wire in his quarter-final (15-13) by 11th-ranked Frenchman Bolade Apithy.

Highly fancied world number one Gu Bongil from Korea had been expected to do well, but could only advance to the round of 32, where he was beaten by Italy’s Stefano Scepi 15-13, much to the disappointment of the local fans. Scepi was then steam-rolled by countryman Luigi Samele in the round of 16, 15 touches to 8.

Also beating local favorite Sooyeon Choi from Korea 15-11 in her quarter final, she then edged fourth-ranked Romanian Bianca Pascu 15-14 in her semi, advancing to the final against Morton. To reach the final Morton had beaten USA’s two-time Olympic gold-medal winner Mariel Zagunis (15-6) in her quarter-final before defeating Germany’s Anna Limbach in the other semi 15-8. Mariel Zagunis reached the top 8 in her first competition back after more than a year off taken to have a child, showing that she has barely missed a step despite her time off.

After her victory in the final, Ukrainian President Petro Poroshenko tweeted his congratulations to the 27-year old; “Congratulations to our Olga Kharlan on the gold medal at the Seoul Fencing Sabre Grand Prix,” he wrote, “I wish you new victories!”

The next FIE Grand Prix event will be held on the weekend of May 11-13 with the men’s and women’s sabre competition in Moscow, Russia.