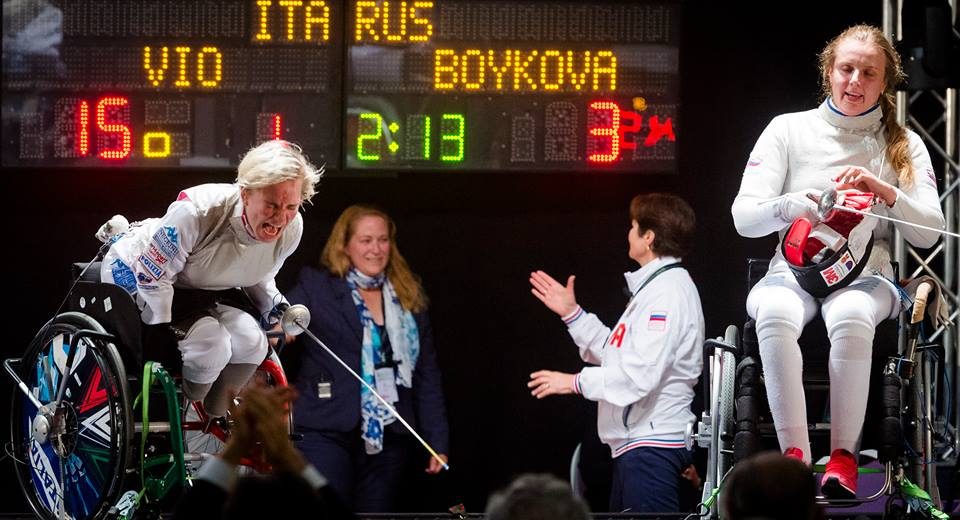 Rome, Italy – The International Wheelchair & Amputee Sports Federation (IWAS) Wheelchair Fencing World Championships wrapped up this past Sunday with Russia emerging as the clear winner, with 7 Gold, 7 Silver and 11 Bronze medals – totaling 25. Italy won 5 Gold, 3 Silver and 3 Bronze medals with a total of 11, putting them in second place. Ukraine and Hungary rounded out third and fourth place respectively, each getting 3 Gold and 2 Silver medals, but with Ukraine just edging Hungary out with 4 Bronze medals to Hungary’s 3. From there, the medal counts are lower, with the highest total being 4.

Team USA took home 1 Bronze medal, putting it tied with Greece for 15th overall. The sole medal came from the Men’s Epee Cat C event, courtesy of Curtis Lovejoy, a two-time Wheelchair Fencing World Champion and 18x Gold Medalist Swimmer. In most other events, however, Team USA placed medium to low, with competitors often being eliminated early on in the events.

Aside from the dominating performances of the top 4 teams, another standout team is Great Britain. The pair of Dimitri Coutya and Piers Gilliver account for all of the medals the team won in the competition, however, of the few other events GBR entered, they tended towards the top 16. Despite a low roster, the team itself placed 5th overall. It would be easy to see them breaking past 10 medals if the team expanded.

Another standout is Hong Kong’s women’s epee team, who accounted for 2 of the team’s 3 medals. In particular, Chui Yee Yu, who was responsible for all 3 in some way, placing 2nd and 3rd for Cat A Epee and Foil respectively and who was on the team to win the Women’s Epee event.

The rules of Wheelchair fencing are rooted in the rules of FIE, with some alterations. Competitors can choose to compete in two of the three weapons and wheelchairs are fixed to a frame, where the distance is determined according to rules in each weapon, either the outstretched weapon arm touching the end or inside of the elbow. One of the larger differences is in the epee target area, which does not include area below the waist. Competitors go through a classification once they meet the Minimum Disability Criteria, and are sorted into four Sport Classes, one of these having two subclasses. Sport Classes 3 and 4 make up Category A, which is the Category with “good sitting balance.” Class 2 makes up Category B with “fair sitting balance.” Finally, Classes 1A and 1B make up Category C with “no sitting balance.”

The Championship took place in Convention Center of the Hilton Rome Airport hotel between Nov. 7-12. The host city for the 2018 IWAS Wheelchair Fencing World Championship has yet to be announced.