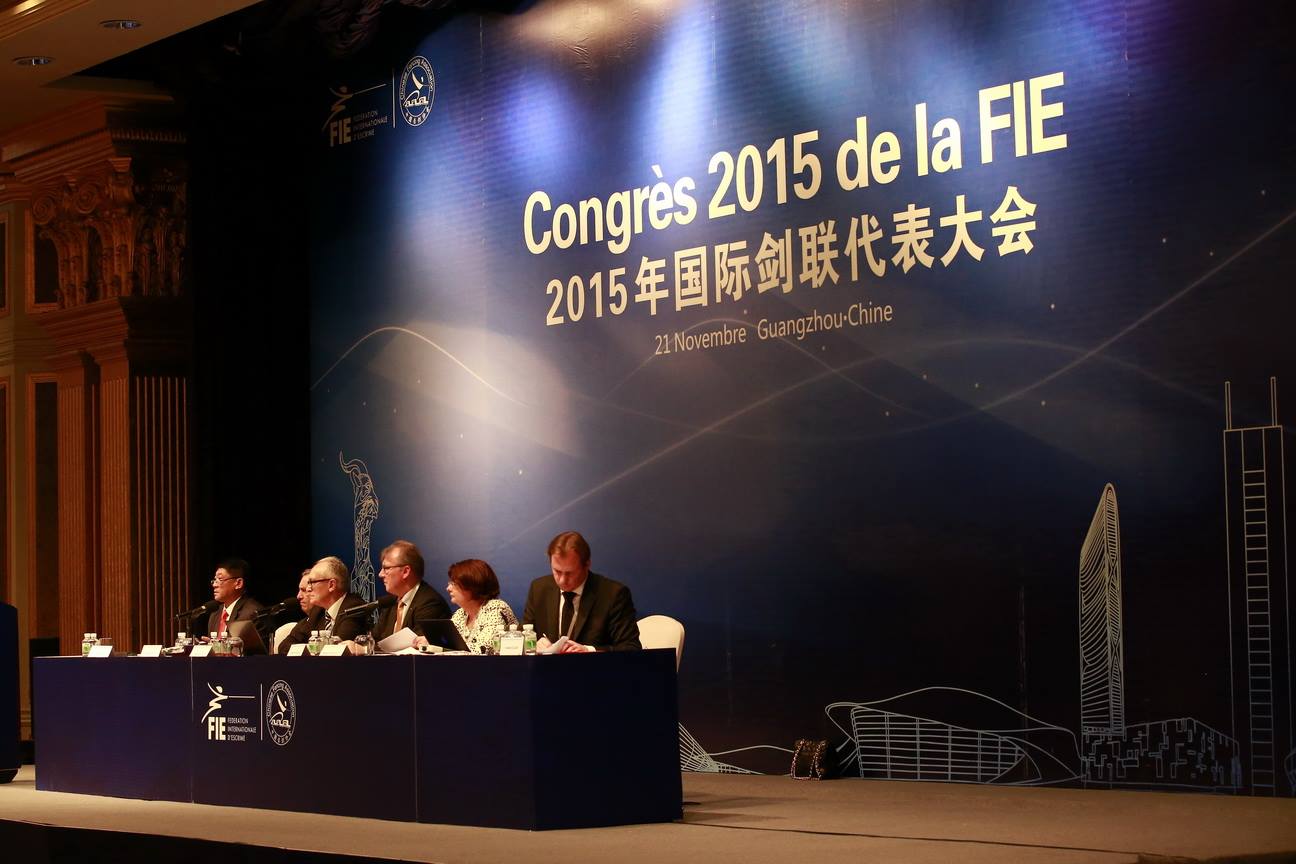 There was no movement on non-combativity but big saber changes at the FIE Congress. Photo: S.Timacheff

Early reports from the 2015 FIE Congress held in Guangzhou, China point to the largest rules changes being in sabre.

The rules change that looks to have the most impact will be the changes to saber. The first is the increase of the machine lock out time from 120ms to 170ms. The second is to test in FIE events putting saber fencers closer together to start each touch.

Increasing the lock-out time to 170ms is intended to allow for more riposte actions instead of fast counter-attacks that result in one light. This will force the referee to make more calls to assign right-of-way – something that the FIE wanted to reduce when putting the lock out time to 120ms originally.

The test rule, placing saber fencers with their back foot at the en-garde lines instead of both feet behind the lines, is intended to reduce the number of simultaneous in “the box”, the middle 4m section of the fencing piste. This modification will be tested in FIE events after Rio until December 2016 and a commission will make a recommendation on whether to continue or now.

US Fencers Sage Palmedo and Race Imboden received recognition for ending the 2014-2015 FIE Season at the top of the points lists for their disciplines. Palmedo for Junior Women’s Sabre and Imboden for Senior Men’s Foil. (Imboden was not able to attend the event to receive his award as he is training for an upcoming FIE tournament.)

A full summary of the votes from the 2015 FIE Congress were reported at the Fencing.net Forums and discussion continues on the implications of the rules changes via the Forum Discussion:

The following are the posts that Bert Van de Flier sent regarding the decisions at the FIE Congress just held in Guangzhou (and managed to get through the Chinese firewall). Everyone should wait for the formal minutes to be released before panicking.

The first fencing news from Guangzhou. The proposal for new passivity rules is withdrawn.

FIE Congress. A Fair Play Council will be created.

FIE Congress Any form of betting; organized or individual in your own sport or in Multi events in which you participate (e.g., Olympics) is strictly forbidden.

FIE Congress. As of next elections at least 30% of Comex should be of the same gender. Same for Commissions and Councils was rejected.

FIE Congress. As of coming season veterans have to pay entry fees for WC. Ind. Fee 55 Team 140 Ref fee ind. 45 Ref Team 45 This proposal was rejected!! For the time being it stays zero.

Lunch is over. FIE Congress Fencers are allowed more and larger adverising on their clothing and equipment, in order to attract more ind. sponsors.

FIE Congress. The second security device on the mask should now be compulsory as of Jan. 1 2016

FIE Congress Research will start to develop a better sensor on sabre.

FIE Congress. Foil and epee start with both feet behind the on guard line. Sabre closer only rear foot behind on guard line. It will be a test. Decision will be made end 16.

FIE Congress Veterans WC should be organized in such a way that fencers can compete in all 3 weapons and team day after ind final on that weapon.

FIE Congress Junior Cadet WC 2018 no candidates. Italy is possibly interested, but it will decide by end of year.

FIE Congress Fencers from Kuwait will fence this season under FIE flag and eventual Rio participation will be under IOC flag unless suspension of Kuwaiti Olympic Committee is lifted earlier.