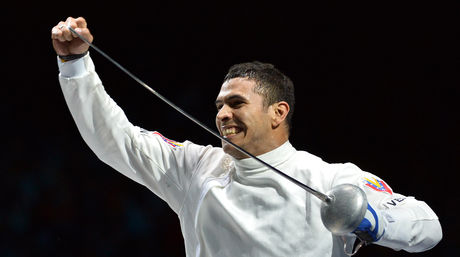 Ruben Limardo signed a sponsorship deal with Absolute through the 2016 Olympics.

Olympic gold medalist Ruben Limardo is now sponsored by Absolute Fencing Gear in the run up to the Rio 2016 Games. Limardo is the latest Olympian to land a sponsorship deal with Absolute. (US fencers Mariel Zagunis, Miles Chamley-Watson, and Daryl Homer are also sponsored by the NJ equipment supplier.)

“We are thrilled to have Rubén join ‘Team Absolute’ as he competes in grand prix, world cup, world championship, and Olympic events around the world,” said Gary Lu, president, Absolute Fencing Gear. “His tremendous dedication, athleticism, and talent in fencing, combined with his popularity and charisma, has been a beacon of leadership for Latin American fencing, and it our honor and privilege to be part of his incredible success story.”