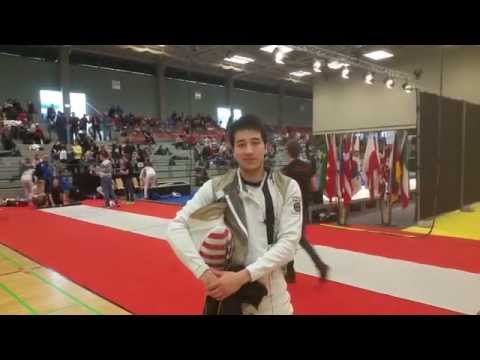 Videos of interviews with the US Men's Foil Team

There’s a YouTube channel providing some great content – interviews with some of the USA’s top fencing athletes and coaches. Over the past month a host of videos went live. These videos offer a view into the lives of the Olympic athletes as they compete at national and international events.

This interview with Men’s Team Foil coach Greg Massialas highlights what we’ve all been seeing – the US Men’s Foil Team is becoming a dominant force on the world circuit and an Olympic Gold in Rio 2016 is the goal:

The US Men’s Foil team defeated Italy not once, but twice 45-44 over the past month with a gold in Paris and a bronze in Bonn. That puts the USA in 4th place in the world standings, up for 5th at the conclusion of last season. Massialas talks more about the Men’s Foil Team following the Bonn World Cup:

Gerek Meinhardt, who now has 2 Olympics under his belt, also talked about the Bonn team tournament. Gerek is currently 5th in the FIE world rankings, joining Race Imboden (4th) and Alexander Massialas (10th) in the FIE’s top-16. Gerek talks not only about the team event, but about the psychology of fighting for every touch.

So what all is making the US team better? This is a group that has competed together and has more experience on the world stage, plus they have the conditioning to compete against the current crop of top level fencers.

OnPoint talks more to the individual fencers in Bonn. Race Imboden, who has made the top-8 in four consecutive tournaments, discusses Bonn and dealing with controversial calls in his loss to Cassara:

There are also interviews with Miles Chamley-Watson who discusses his diet and training program:

and Alexander Massialas who talks about how he deals with those early AM calls – his first DE match was at 8:30 am in Bonn!