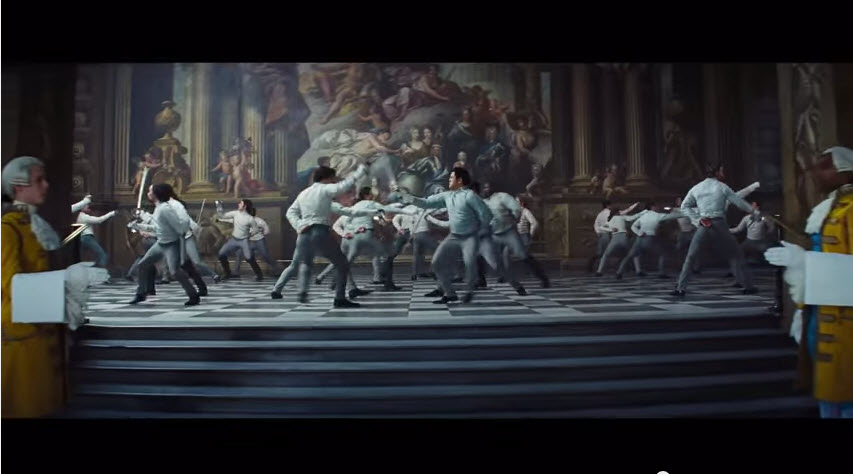 There seems to be a lot of content coming out related to fencing recently. First there are the videos going up from the World Cup events on the FIE channel as well as a lot of animated gifs of great saber actions from the Sydney Sabre blog. I found a few others that I liked a figured it was time for a video share post. These are not all fencing-specific videos. When I do one of these posts, I’ll look for things that are not just a bout video, but rather fencing emerging in other media – television or movies, or innovative usage of the standard fencing bout footage.

First off, we head to movie-land: Disney launched a trailer for Cinderella which hits theaters in March, 2015. We love Helena Bonham Carter as the Fairy Godmother – and look, there’s some fencing involved:

Jesse Morris posted his “Fails of Fencing” and (unintentionally) made his video a fail itself by misspelling fencing in the opening title sequence! It’s a great laugh and I want to see more of these for a “Fencing Not Top 10” reel:

Leon Paul gets a shout out from the IOC with a video on how fencing masks are made. Ben from Leon Paul has clued me in that the channel will later show videos on: how to make a sword, how coaches and fencers train and new technology in the Olympics. Very cool!

Another addition is this trailer for a Danish film about a youth fencer who it seems is having his first taste of adversity in fencing. If you are a fencing parent, watch this trailer and read the subtitles. I’m excited to see this when the full film is released:

The Fencing Champion trailer from Final Cut for Real on Vimeo.