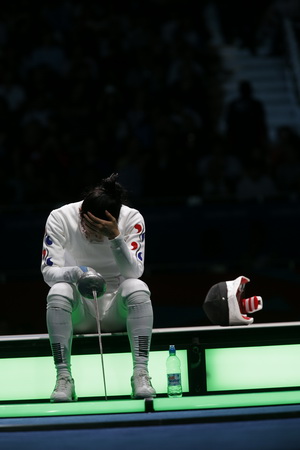 Shin A Lam stranded on strip after a last second loss highlighted issues with current rules and equipment around time keeping. (Photo: S.Timacheff)

The 2012 Games was not Fencing’s finest moment. Just ask Shin A Lam (KOR).

The incident highlighted a gap in the rules and equipment related to timing of the match.

The FIE will vote in this year’s Congress on the following rules change:

Motivation: After the incident in London, there is a proposal to change the rules so that also milliseconds are
shown on the chronometer and that the referee controls the time-keeping in the last minute. There is an initial
proposal from Swiss Timing to have the command ”Allez” being given by the machine.
Proposals of the Commission:

Opinion of the Refereeing, Promotion Commissions and Coaches Council: In favour. These proposals
should be submitted to the SEMI Commission for approval and preparation of the corresponding texts
into the Rules.

Opinion of the Refereeing Commission: in favor