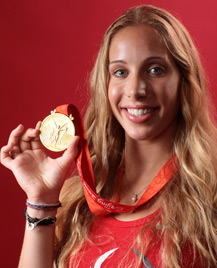 Mariel Zagunis was named the USOC Female Athlete of the Month for July following her silver medal finish in individual and gold in team at the 2014 Fencing World Championships. Men’s foilist Gerek Meinhardt and the US Women’s Sabre team were nominees for July honors as well.

Zagunis captured the silver medal at the FIE Senior World Championships, held July 5-23 in Kazan, Russia, and finished the season as the No. 2 ranked women’s saber fencer in the world. Zagunis also anchored the U.S. women’s saber team to the gold medal – the third in the team’s history and its first since 2005.

Williams clinched two gold medals in the 100-meter and 4×100 at the IAAF World Junior Championships, held July 22-27 in Eugene, Oregon. Williams clocked 10.21 in the men’s 100 for his second lifetime best of the championships, and he finished with the third-fastest 4×100 time in world junior championships history.

Each National Governing Body may nominate one female, one male and one team per discipline. A voting panel selects the winners from the pool of nominees with online fan voting via Twitter accounting for 10 percent of the total vote.