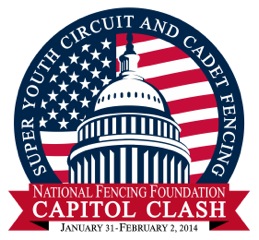 The Capital Clash - Proceeds will benefit the National Fencing Foundation of Washington, D.C.

The Capital Clash 2014 event adds in a Cadet event to the regular SYC (Super Youth Circuit) schedule. It will be held January 31 – February 2 at the Gaylord National Hotel and Convention Center, in National Harbor, MD

The Capital Clash bills the set of Cadet events as a tune-up for the Junior Olympics.  Cadet winners compete for permanent recognition on The Gaylord Cup.

The Clash is one of the largest youth tournaments held and is being run at the Gaylord, a 70,000 sq ft convention center – so if you are going be prepared to move around and have snacks and water for your fencers. At large events keeping them hydrated and eating light snacks will impact their performance.

Live results are available at: http://live.capitolclash.com/