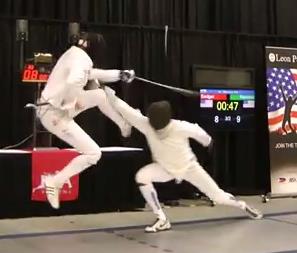 EDIT: Peregrine has requested that the video be taken down as CyrusOfChaos was sitting next to his coach. Video is down for now, but analysis is still below.

All images are screen captures from CyrusOfChaos’s recording of the final. Thanks to Andrew Fischl for providing a valuable service to all fencers with his video channel.

Period 1: Badger begins the bout demonstrating his newfound patience, a characteristic similarly shown in his NCAA semi-final bout against Marco Canevari. After 15 seconds of a clear unwillingness to fence from both parties, referee Aerin Hohensee progresses the bout to the second period.

Period 2: Badger and Ramirez begin to fence from advance-lunge distance, with Badger taking the initiative to push Ramirez. And fifteen seconds go by with no blade contact, and we’re in the third period within thirty seconds. God I hate this stupid rule.

Period 3: I get the feeling this is going to turn into classic Badger. If you ever fence him, it is extremely difficult to understand his tempo and timing. Extremely unorthodox, and explosive in his closing actions. Here goes.

The two fencers begin pressing around each other’s guards, moving with more urgency to set up actions. Ramirez begins to push Badger towards Badger’s two meter zone, flicks with an advance in preparation to close the distance…

And then BOOM! A last second disengage on Badger’s prime to take a 1-0 lead.

On the second touch, we see Badger’s extremely quirky tempo that catches Ramirez off guard as he goes from a relaxed position to a beautiful flick onto Ramirez’s hand. 1-1

Ramirez reverts to the same action that scores him his first touch. A short feint to draw Badger’s prime, yet this time, Ramirez is far enough extended in his fleche that he manages to barrel through the prime and score a touch. 2-1.

In the “hot damn, Badger can lunge helluh far” moment of the bout, Badger explodes off the line with a quick advance-lunge and is met with Ramirez’s point for a double touch. 3-2.

Ramirez begins to push Badger again, which he had luck with on his first two single lights. Badger catches Ramirez as the hand drops and goes in for a counter flick. 3-3.

A short feint from Ramirez, and out comes Badger’s prime again. This time, it’s a double touch. 4-4.

A corps-a-corps, and a single light for Badger, but Hohensee correctly revokes the touch as it is after the corps-a-corps. Badger calls for video. Nope. No sir.

Finally, Badger’s signature touch comes out: his unorthodox squat down counter in preparation. He catches Ramirez before his front foot lands for a single light. 5-4.

Out comes Badger again with an explosive fleche to funky squat down disengage, and it looks like his left foot goes out of bounds.

Hohensee reviews the action, and sure enough, Badger is out of bounds. Badger attempts to fleche into Ramirez’s advance, and Ramirez responds with a well-timed disengage to hit Badger for a single light. 5-5.

Again, Badger pulls in Ramirez, attempting to attack into his advance with a simple preparation 8 to 6 and is met for a double. 6-6, and we’ve only had 70 seconds of fencing.

Ramirez pushes Badger once again, closes with a 6 and thinks he’s hit. You can hear him yell as he begins to celebrate early…

Bud Badger sticks his arm out and gets a free touch. 7-6.

Badger reverts to the strategy of pulling Ramirez in and waiting for the attack into preparation, but this time Ramirez steps in with a beautiful half advance invitation, baiting the attack, and responds with a quick parry 4, transfer to 8. Badger attempts to scoop the prime, but it’s too late. 7-7.

Badger and Ramirez share one of those rare awkward moments where the tips hit, causing a double, which is obviously thrown out. As Hohensee resets the fencers, Badger gives Ramirez a gift: a straight lunge that Ramirez is more than ready for the moment Hohensee calls “fence!” 8-7 Ramirez.

Badger begins to change his tune and push Ramirez to see if he can change from the counter-time/attack in preparation actions that had worked at about 50% before. In and out of the distance with quick half advances, and Badger explodes into a fleche on Ramirez’s retreat, but Ramirez hits him with an off-balance parry 6 riposte, securing the largest lead of the bout with two touches. 9-7, with just over a minute remaining.

Badger takes on the role of aggressor once again. One subtle change to notice is that Badger changes levels here, moving to the right side of the strip as Ramirez continues controlling the left.

In changing angles, Badger is able to distort Ramirez’s perception of distance just a little more. Given the unpredictability of Badger’s fencing, this makes judgment of timing that much more difficult. Sure enough, it pays off, and Badger comes out with a beautiful feint to the toe with a remise under the wrist. Single light, 9-8.

And now, the “Bro I’m going to flick you in the back and land flat and this is going to hurt moment,” Badger does just that. Off the line with a fleche. As Ramirez extends to counter attack, out comes the prise-de-fer complete with scissor kick. This one had to have hurt Ramirez.

As Ramirez begins to escape the strip, Badger his him with a remise for a single light. But is it good?

Hohensee says no, and Badger calls for a review. Call is upheld, and we’re still at 9-8 Ramirez. We’ve got just about forty seconds left, and Badger goes for a fleche way out of distance and is met with a simple 4 riposte. 10-8 Ramirez.

So what happens when you back a ferocious Badger into a corner with under forty seconds left? The badger is going to go crazy.

It’s off to the races with a fleche off the line, and Ramirez steps into him for a double. 11-9.

Once again, a tense of the hand, and off to the races to try to surprise Ramirez again. Double touch. 12-10.

For the third time in a row, off the line in desperation, but Ramirez backs off to resume normal fencing. Down two with just over twenty seconds left, Badger is forced to resort to pushing. In a weird moment where both fencers seem to stop moving for a moment, Badger fleches at Ramirez as Ramirez attempts to squat down and counter, and gets a single. 12-11.

Badger comes out with another quick attack off the line and Ramirez backs off, hoping to clear the distance and close out Badger with his parry-ripostes that had been effective to this point. Badger does a HUGE feint to the outside of Ramirez’s guard…

Then miraculously comes back around for a single light without getting hit or parried. 12-12.

Tie game, 11 seconds remaining.  Badger apparently has a pair of iron balls, because rather than let the clock run out, he’s hungry for blood and comes out pushing Ramirez aggressively. Badger gets just a hair too deep in his preparation and Ramirez fleches right into him. Single light, 13-12 with four seconds remaining.

What does Badger have in his bag of tricks? Well, he’s got something. Just look at this sinister smile:

Someone in the crowd yells to Peregrine to “go down in a blaze of glory.” He does just that. No, I cannot describe what happens here, but look at this vertical as Badger somehow gets a single light in mid-air to tie it up as time expires.

Priority goes to Ramirez, and here we go. Badger begins to push, feinting, retreating, feinting, retreating and pushing ground on Ramirez a little more and more with every preparatory action. He begins to back off, presumably to revert to the strategy of hitting Ramirez in preparation and draws Ramirez to the center. Sure enough, that’s exactly what Badger is going for, but Ramirez draws it out, takes a 6…

Overall: It was clear from the only period of fencing (the third period) that neither fencer wanted to fence the finals at this tempo. Given non-combativity being called in periods 1 and 2, Badger and Ramirez were forced to fence at an untraditional epee tempo. A total of 26 touches were scored in the third period, with three of them being scored as doubles; thus, on average, each touch took about 7.8 seconds on average to score. This is largely attributable to Badger’s many attacks off the line.

Overall, this bout was won by Ramirez’s understanding of Badger’s basic strategy of attacking into Ramirez’s preparation. By the time two minutes of fencing had elapsed, Ramirez was able to bait Badger’s fleche out with the half advance and be ready for a parry-riposte the instant Badger came out to attack.

Badger seems to be continuing to evolve as a fencer and his tactical prowess is growing alongside his mind-blowingly unorthodox repertoire. Ramirez’s combination of astute footwork, incredible bladework and defense will surely continue to carry him to future NAC wins.