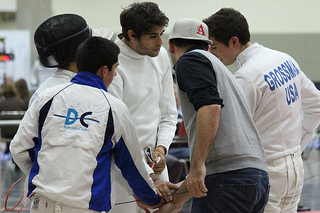 Every club offers a unique set of people, coaches, and facilities to satisfy a particular fencer’s needs. These criteria should help you evaluate the club that is (or isn’t) right for you:

There’s an idea in fencing (as originally told by Gary Copeland, I believe) that says there are three types of clubs: champion clubs, recreational clubs, and money clubs. A champion club is the kind of place that produces high-caliber athletes and national champions like clockwork. A recreational club is where a couple of the boys will go to after work to socialize, hang out, and fence. And lastly, a money club is where the ownership wants to just collect enough cash that they can swim in it. It’s an interesting idea that provides a high level overview of picking a club based on competitive preferences, but I figured I’d break it out into a few more steps.

According to the United States Fencing Association (USFA) website, there are approximately 330 registered fencing clubs in the country. Every club offers a unique set of people, coaches, and facilities to satisfy a particular fencer’s needs. These criteria should help you evaluate the club that is (or isn’t) right for you:

In many ways, a fencing club is just as much a social club as it is an athletic facility. Beers after a (senior or veteran) tournament or practice are commonplace, social gatherings outside of practice hours happen frequently, and teenage fencers tend to gravitate towards romance, usually in two week spurts before they get tired of each other and break up. (My friends at Salle Palasz are building a hot tub and a bar inside their club. I’ll be frequenting there when that’s complete!)

Those in the working world who maintain a serious competitive regimen will spend dozens of hours in the club in a given week, and even the parents will be engrossed in the social component of a fencing club as they wait for their kids on a given night.

It is for these reasons that the people aspect of a fencing club is one of the most important criteria to evaluate in selecting a fencing club. When assessing a club’s fit, ask yourself: “Can I spend 10-30 hours per week training with these people? Is this a club that the fencers work together cohesively? Can I tolerate the bad apples without wanting to breakdance spin kick someone to the face?” You will be around your teammates a lot, so make darn sure the people side of the club suits your personality.

At the end of the day, evaluating a coach is really based on personal preference as to where you want your fencing to go. If you’re recreational, you want a fun, high energy coach who is teaching out of love for the game. If you’re serious about the sport and want good results both nationally and internationally, you want a coach with a proven track record in developing elite athletes (the same criteria of teaching out of love for the game applies for the best coaches too).

Looking for a coach based on your desired level of effort you’re willing to put in fencing is one thing, but there are a few areas in a coach to evaluate, and if the coach lacks these qualities, you might want to reconsider the club:

These are just a few of the means of evaluating the coaching aspect of the club. Look for good communicators, a coach who is able to expand your repertoire, lovers of the sport, and (in my opinion) most importantly, teachers of life. If the coach/es lack these qualities, it might not be a good fit.

As someone who primarily fences epee, I’m not so sure I would waltz into Massialas Fencing Foundation and join the club (as amazing as they are in developing foilists). Similarly, if I were a recreational fencer, I can’t say that Olympian producing factory New York Athletic Club (NYAC) would be the right fit (yeah yeah I know you need an invite anyhow). Make sure that in joining a club, there is a stable of fencers that share both your weapon preferences and your desired competitive goals.

4. Quality of Equipment and Facilities

Not every club can afford the luxury of a permanent space with electric machines and reels. But, I’ll be frank in saying this: dry fencing is the equivalent of a professional golfer playing Putt-Putt to get ready for the PGA Tour. It ain’t gonna do you a whole lot of good. So, going back to the idea of desired level of competitiveness idea, if you want to take the sport seriously, you need a good facility to train in with the right equipment. The top ten ranked seniors in mens/women’s epee, sabre, and foil have one thing in common: they all operate out of clubs that hold a permanent space with electric machines/reels (or a college team facility that has such equipment). Simply put, you’re going to be as competitive as Jabba the Hutt in the 100 meter dash if you try to compete above the local level by practicing with dry fencing

Unfortunately, when it comes to cost, fencing is not a sport for the pauper; but there’s still a certain point where prices can reach exorbitance. Ask yourself: “What am I paying for?” If the facility is top tier, the coach is a ferrari, and the quality of fencing is superb, then the price is right. If, however, you’re operating out of a recreation center with a mediocre coach and they’re charging $50 for a twenty minute lesson and $1,000 for annual membership, you might want to consider a different option. Evaluate price on the following criteria:

The club you choose is about what your gut tells you is a good fit, but I hope this provides a framework of criteria to consider. Think of the people, the coaches, the facilities, and the price, and your desired level of competitiveness, and you probably won’t go far from wrong!


Damien is a competitive fencer and volunteer assistant coach at DC Fencers Club in Silver Spring, Md. Damien was the coach of a London 2012 Olympic Athlete in Modern Pentathlon. He is an A-rated epeeist and was a member of the 2012 North American Cup Gold Medal Men’s Epee Team, and a Silver Medalist in the 2013 World Maccabiah Games.