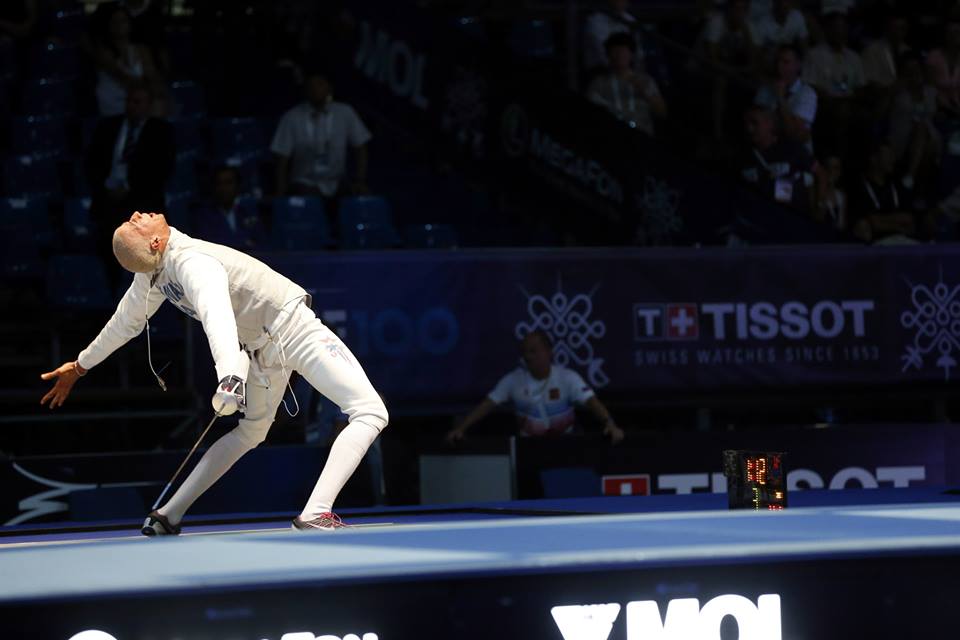 Miles’ road to victory was far from easy. Coming in as the 17th seed, Miles had to fence through pools (he went undefeated), and then drew tough bouts against Jovanovic, Avola, and then world #3 Alexey Cheremisinov, who Miles squeaked by on a 15-14 victory. Chamley-Watson, known in the fencing world as a “comeback kid” played the role of what he called “destroyer king,” completing an incredible comeback on Sebastien Bachmann after being down 11-3. After winning three consecutive bouts 15-14, Miles seemed to be fencing with impeccable timing, precision, and distance. To make the gold medal match, he faced world #2 Valerio Aspromonte. After starting the bout 8-8, Chamley-Watson pulled away and won with a decisive 15-9 victory.

Defeating Akhmatzhukin for the gold was done in a matter of three minutes and thirteen seconds. As Miles scored the 15th touch with a beautiful six-disengage-lunge from his own two-meter zone, he pulled off his mask and ran to give his long-time coach, Simon Gershon an embrace. It was a great moment between student and coach, and capped off one of the greatest days in American fencing history: the day we crowned our first senior men’s world champion.

Miles is now focused on a gold medal in the Rio Olympics. He was kind enough to sit down with Fencing.net and discuss his thoughts on his trademark move, Russia and the controversies surrounding the Sochi 2014 games, and how he capped his comeback on Bachmann.

Damien Lehfeldt: First off, congratulations! How does it feel to be the first senior men’s world champion for the United States?

Miles Chamley-Watson: Thank you very much.  It feels incredible to become the first senior men’s world champion for the United States.  I have worked extremely hard and it is humbling to have the support of the entire country.

DL: Even before you celebrated, the first thing you did after scoring the final touch against Arthur Akhmatkhuzin was run over to your longtime coach, Simon Gershon and embrace him. Tell us a little bit about your relationship with Simon.

MCW: The first thing I did was grab my coach because we have been through it all. Obviously, I have had a wholesome fencing career, but our relationship extends beyond just fencing.

He has been there for me during my highs and my lows. I have known him my entire life, so it was an instinct to grab and hug him before celebrating. If his wife was there I would have done the exact same thing. Irene Gershon has been there since my wild and crazy youthful days when I was a pain in the butt. After I hugged him, it was somewhat of an out-of-body experience. I do not remember jumping 30 feet in the air or anything!

DL:  One of the fencing world’s favorite moves is your famous “Chamley-Watson” touch. Was that something that was taught to you by your coach or did you learn to do it through experimenting?

MCW: The “Chamley-Watson” has become a world-wide sensation, which has been amazing.  I have even had some people contact me about patenting the move. I did the “Chamley-Watson” in a pool bout against Hinterseer from Austria in Turkey during the Senior World Championships. It was an experiment that happened to become a very useful move. Simon asked me: “Miles, what on earth was that?” and I told him. We started calling the move the “Chamley-Watson” soon after!

DL: In the most thrilling bout of the day, you overcame an 11-3 deficit to come back and win over Germany’s Sebastien Bachmann. How did you change yourself tactically, and what advice can you give to the fencing community on coming back when you’re down?

MCW: Everyone in the world knows that Bachmann is an incredibly hard fencer to attack, so I changed my game so I would be more stubborn in my approach and preparation. Each time I attacked him, it simply did not work. I decided I would start attacking him with the intention of picking up the blade in opposition which I had anticipated being the safest route to mounting a comeback. This gave me enough time to judge the distance, which was the difference in the match.

As for coming back in a bout, the best advice that I can give the fencing community is to always slow down your opponent, so using actions like “line” or smaller steps in your footwork allows you to slow your things down which gives you more time to judge the distance better.

Mentally, always tell yourself that it is never over until those seconds end. I have always been known as the “come-back” king which is a good thing as well as a bad thing, but I am hoping to change that to the “destroyer king!”

DL: I have never heard the term destroyer-king! I like it! So Miles, We’re just under three years away from the Rio 2016 Olympic Games. What areas do you need to improve on between now and then to become an Olympic gold medalist?

MCW: Three years may seem like a long time, but it is right around the corner. I need to improve on my footwork a bit, getting my steps smaller, as well as focusing on starting the bouts off stronger instead of always coming back and using more energy than I should. I feel like I am in a great state of mind, and hope I can keep improving. I want nothing more than to become the 2016 Olympic Champion.

DSL:  What is the team dynamic like between you, Alex Massialas, Gerek Meinhardt, and Race Imboden?  It seems like you guys are all very close.

MCW: The team dynamic seems to be good. I feel like we all understand each other and just want to win.

DL: Talk to us about your memory of the first time you picked up a weapon.

MCW: The first time I ever picked up a foil was when I was 9 ½ years old. It was a plastic one because no one trusted me to have an actual foil in my hand! It was honestly love at first site. I was a huge soccer and basketball player growing up, but had to make a sacrifice, so I did. It feels great to know that I made a good choice, or at least I think I did!

DSL: What do you make of the controversy surrounding Andrea Cassara’s final touch (or non-touch) at World Championships?

MCW: I watched the match and cannot see if he hits or not, but I know Andrea Cassara very well and feel that if he really thought he hit he would have thrown a huge tantrum.

DSL:  In your interview with USA Today, you called Russia’s threat to persecute gay athletes in the Sochi Olympics an “important topic.” Russia’s minister of sport, Vitaly Mutko has said that no athletes will be exempt from their laws, raising questions as to whether or not Russia will be detaining gay Olympians in the Sochi games. With the threats from Russia in mind, how do you think the IOC and the rest of Olympic participants should approach the Sochi games, if at all?

MCW: This is becoming an extremely controversial topic, and it should be. I believe strongly that an Olympian is an Olympian no matter what sex, race, and gender they are. Your sexual preference should not matter.

DSL: Will we see Miles Chamley-Watson fencing in the Veterans 70 division?

MCW: Hahaha that is a long way down the line, but you never know what God has in store for you!

DSL: Thank you Miles. Here’s to your continued success and good luck as you continue to prepare for Rio!