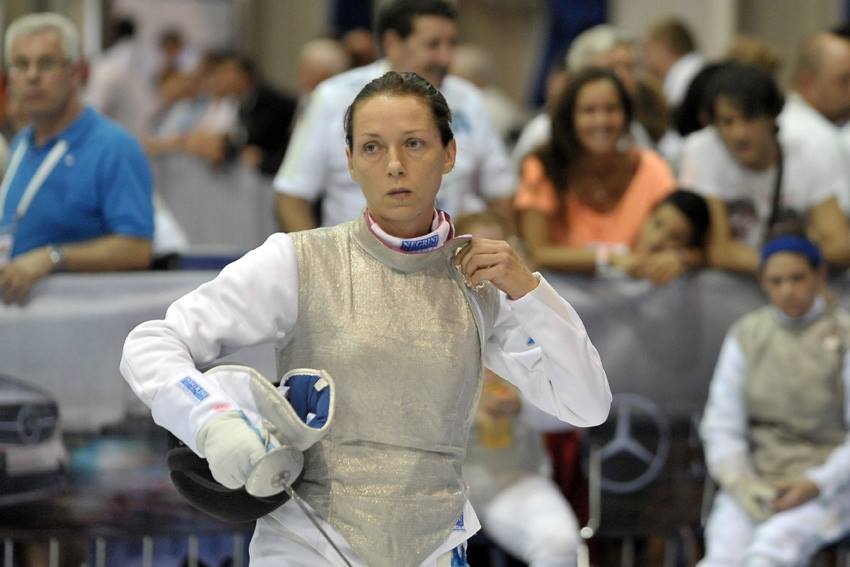 Vezzali will go for another medal. Photo FencingPhotos.com

Budapest, 5 August 2013 – Only little surprises happened on the first day of qualifications at the 2013 Fencing World Championships in Budapest, Hungary.

Despite giving birth to her second child only three months ago, Valentina Vezzali (ITA) qualified easily for the women’s foil final day (7 August) with only one loss in the preliminary pools. In the direct elimination bracket of 64, she will face Hungarian Gabriella Varga who will be supported by her home crowd. It will be interesting to see if 2012 Olympic Champion Elisa Di Francisca will take her third major title in a row or if her team mate Arianna Errigo and Russian world number 3 Inna Deriglazova can stop her this time.

In men’s sabre, Italian Olympic Champion Aldo Montano also qualified easily from the pools for the 64 direct elimination table. Everbody’s eyes will also be on Olympic Champion 2012, Aron Szilagyi, and Olympic silver medallist Diego Occhiuzzi (ITA). Both showed extraordinary performances in the post-Olympic season and are the top-favourites for the gold medal on 7 August.

In women’s epee, 138 fencers fought for 48 places in the direct elimination on 8 August when current undisputed world number 1 Ana Maria Branza (ROU) will try to go for another medal at a major event. However, Anna Sivkova (RUS), Hungarian Emese Szasz and 2012 Olympic silver medallist Britta Heidemann (GER) will want to have a say, too.

The event will be live streamed from 7 to 12 August on the Fencing Channel on YouTube at www.youtube.com/fencing and broadcasted on a global level.