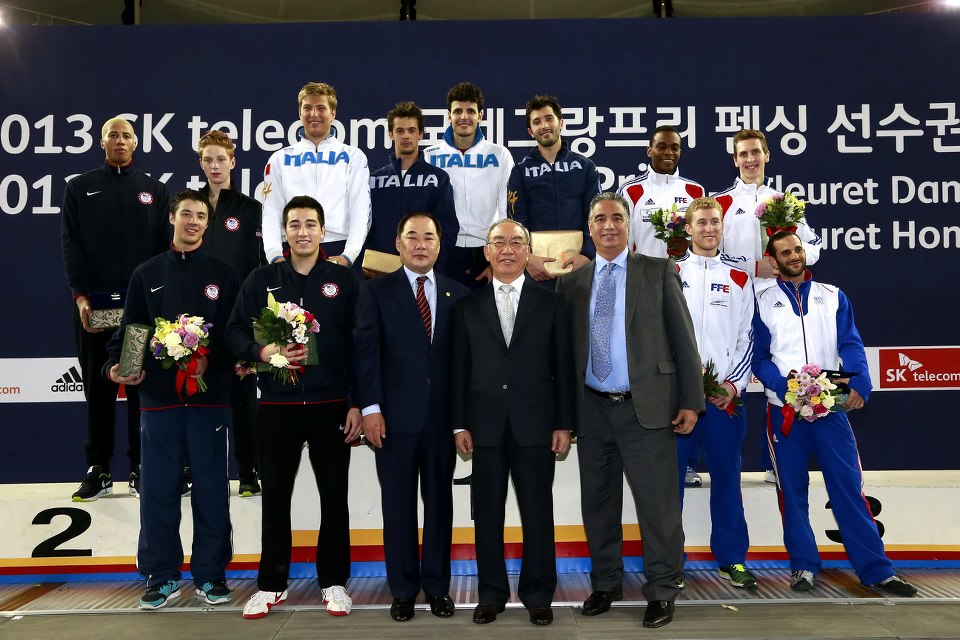 Maya Lawrence finished 10th at the Xuzhou Epee Grand Prix, a career best. Her initial 11th seed exempted her from the pools and preliminary rounds, placing her in the table of 64 where she defeated Vanessa Galantine (FRA) 15-13. She then followed up that win with another against Alexandra Magdich (RUS)  in the table of 32, 15-14. In the table of 16 she faced off against 2012 Olympic team silver medalist A Lam Shin (KOR), where Lawrence lost 15-7. A Lam Shin would lose in the quarterfinals to Ana Maria Branza (ROU) 12-11. Branza then faced off against Shin’s London teammate Injeong Choi (KOR) in the finals. Choi went on to win the match 15-9.

The finish keeps Lawrence in the top-16, dropping a couple of spots to 13th. Sun Yujie (CHN) holds 1st place in the world rankings with a 2 point lead over #2 Yana Shemyakina (RUS).

Full results can be viewed via the FIE.

Daryl Homer earned the USA’s top individual result with a 20th place finish at the Athens Sabre World Cup this past weekend. His initial 9th seed exempted him from preliminary rounds on Friday, placing him in the table of 64 to start on Saturday. Homer defeated Ciprian Galatanu (ROU) 15-11 and was the only American to advance to the table of 32. He lost his next bout to Marco Ciari (ITA), 15-8. Ciari would lose in the next round to Benedikt Wagner (GER) 15-13. Wagner went on to defeat Enrico Berre’ (ITA) 15-10 in the quarter finals as well as 2012 Olympic team gold medalist Bon-Gil GU (KOR) 15-13 in the semi-finals. Wagner’s run was cut short in the finals as 2012 Olympic individual gold medalist Áron Szilágyi (HUN) won the championship bout, 15-9.

Other finishes: Aleksander Ochocki went undefeated in pools on Friday and advanced to the table of 64 on Saturday with a 21st seed placing. He lost his bout to Ferenc Valkai (HUN), 15-34 and finished 34th overall. Andrew Fischl finished 4-2 in pools and won against Evaggelos Boukas (GRE) 15-10 and Trofim Velikiy (RUS) 15-14 in the preliminary rounds on Friday to advance to the table of 64. On Saturday he lost to Andriy Yagodka (UKR) 15-13.

This World Cup also marks the return of Olympian Jeff Spear to competitive fencing. Spear had fractured his hand earlier this season and had not been able to compete since the injury. He went 3-3 in his pool bouts, but was able to come back and beat Guillermo Mancheno (ESP) 15-10 and Csaba Norbert Gall (HUN) 15-13 to advance to the table of 64. He was matched up against 2004 Olympic team bronze medalist and three time (2010-2012) European Fencing Champion Aleksey Yakimenko (RUS). Spear lost 15-12 and finished 61st.

Miles Chamley-Watson had a great weekend at the Seoul Foil World Cup, finishing in the Top 8. It wasn’t smooth sailing for him to get there though; he was the only one of his London Olympic teammates not to be exempted from fencing the preliminary rounds. He had a shaky start, going 4-2 in pools, but won his preliminary bout to advance to Saturday.

In the table of 64, Chamley-Watson defeated Andrii Pogrebniak (UKR) 15-9. At the same time, Alexander Massialas won his match against Enzo Lefort (FRA), also 15-9.

With both advancing to the round of 32, the teammates had to fence each other. Chamley-Watson claimed a 15-13 victory to advance to the table of 16, where he defeated Artur Akhmatkhuzin (RUS) in a close match, 15-14. In the quarter-finals he lost to Hua Li (CHN) 15-11, giving him a 7th overall finish.

Hua Li lost to Erwan Le Pechoux (FRA) 15-9 in the semifinals. Le Pechoux faced off against #1 seed Andrea Cassara (ITA) in the finals, who bested him with a 15-8 victory.

Due to their top-16 world rankings, Alexander Massialas, Gerek Meinhardt and Race Imboden all immediately advanced to the table of 64 on Saturday and did not have to fence on Friday.

Massialas was knocked out in the round of 32 as previously mentioned by Chamley-Watson. Imboden lost to Jeremy Cadot (FRA) 15-7 in his table of 64, finishing in 34th. Meinhardt lost to Dmitry Komissarov (RUS) in a close 13-12 match, finishing 35th overall.

Erba had fortune smiling on her as she entered the day as the 23rd seed but defeated #9 Nzingha Prescod (USA) 15-13, then #7 Ysaora Thibus (FRA) 15-6 before facing top seed and team mate Arianna Errigo. Erba would not be denied, and defeated Errigo 15-10. Her luck would not hold, as she lost 15-12 in the semi-finals to Deriglazova.

The US Men’s Sabre Team finished 8th on Sunday. The team, comprised of Daryl Homer, Ben Igoe, Andrew Fischl, and Aleksander Ochocki, started with an initial 7th seed and had a bye into the table of 16. They won their opening bout against the Ukraine, keeping a lead to finish the match 45-37. They lost in the quarter finals to Russia, who held a steady 40-29 lead going into the final bout, with a final score of 45-37.

Team USA went on to fence for seventh, ultimately being defeated by Romanians 45-39 to give them their 8th place finish. South Korea narrowly lost to Hungary 45-43, finishing 6th overall.

Full results available from the FencingWorldWide.

Seoul Foil World Cup – Another US vs. Italy Match

USA Men’s Foil Team had a great end to their weekend, bringing home a silver medal that was also their third straight World Cup medal. The team of Alexander Massialas, Race Imboden and Gerek Meinhardt started their day fencing Belarus in the table of 16, winning 45-25. In the quarter finals they won against South Korea 45-36.

The USA started strong, entering the 5th bout with a 20-14. Massialas fenced a subbed in Giorgio Avola, who cut lead to 25-24. Imboden came back and won the 6th bout, putting them back in the lead at 30-25. Chamley-Watson won the 7th bout, keeping the American’s in the lead 35-29. Andrea Cassara made a terrific comeback against Imboden to give Italy a 40-38 lead going into the last bout. Andrea Baldini scored 5-1 touches on Massialas, giving Italy the victory.

The silver medal keeps the standings stable with USA at #2 and Italy #1 heading into the final team event of the season next month in Cuba.