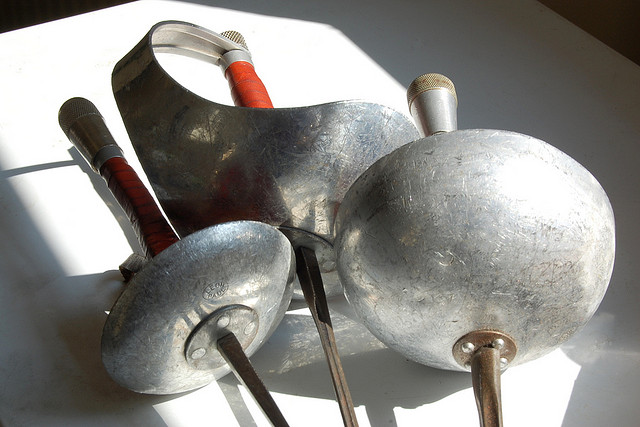 Collegiate fencing isn’t all done just because the NCAA tournament is over. Just as other sports have divisions outside of NCAA Division I, fencing features other levels of collegiate fencing. This week Madison Haughie takes a look at the USACFCs.

This weekend thirty-three club teams will be traveling to Michigan State University for what is considered to be the biggest collegiate fencing event in the world: the United States Association of Collegiate Fencing Club’s (USACFC) Championships.  Formed in 2003 and first hosted at the University of Florida, club championships was designed to give student athletes a national team competition which otherwise was not afforded them because their school did not have an NCAA fencing program.

Bruce Capin, founder of USACFC and the championships as well as head coach for University of Florida Fencing Club, says the event holds a valuable place in the collegiate fencing community. “We have many juniors who quit upon entering college.  There are just over forty schools with programs, so we lose a valuable part of the fencing population. With championships, club teams have been born, prospered, and perhaps in the future will add to the NCAA sponsored list of teams.”

Capin’s Florida team has seen great success at championships. In particular, they have held the first place overall school title for the past three years, an impressive feat as many of the club members only began fencing their freshmen year of college. But some successes don’t involve titles or medals. Sometimes just the presence of a club at championships and their sustainability through the years to compete competitively is enough of a success in itself.

Clemson University sets an example for other clubs that find themselves with few resources. Clemson’s club does not have a head coach or anyone in a true coaching capacity. Instead experienced students teach the inexperienced. Yet the club, while in a stage of rebuilding, has survived and this year held one of the biggest USFA tournaments in the southeast (and the biggest in the state of South Carolina) – The Tiger Open.

When asked about the skill level of club championships versus the NCAA schools and who he thought was strong contenders for medals this year, Capin reminds us that the point of championships is the fencing.  “Derek Cotton, one of my closest friends once said concerning the level and who wins – ‘Does it matter?  They are benefiting from this activity.  That is what is important.’  I would add that they are giving all they have because they love what they do.  The emphasis is on the struggle, not the end result; the journey and not the destination.  That concept reflects the innocence one might feel walking into the venue in support of what the USACFC strives to do.”

Full list of participating teams and rosters can be found here: [link]

The University of Maryland Fencing Club is also hosting a live results page for the USACFC Championships.

The format of the individual event is reported as two pools with the top-4 overall fencers in each weapon moving to 15 touch direct elimination bouts. This is similar to the NCAA format.