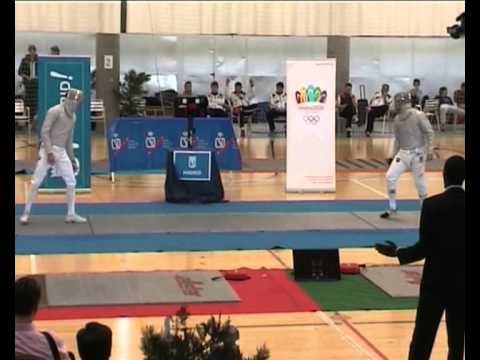 Spain took the idea of a home court advantage to heart as Fernando Casares won the individual title and Spain knocked off the top seed in the team event at the Villa de Madrid.

The Villa de Madrid Men’s Saber World Cup was something of a mixed bag this year. The event was lacking a few familiar faces as countries are trying out some of their younger athletes to determine who looks good for the Rio Olympic Cycle, plus some athletes took the event off due to injuries.

Veniamin Reshetnikov (RUS), currently ranked 9th in the world, filled in for the absent Kovalev and Yakimenko admirably – bringing home the silver.

Madrid’s gold medalist – the real upset of the event – was won by Fernando Casares of Spain, stepping into the top-8 for the first time since a 5th place finish in 2009. After finishing the 2011/2012 season ranked 106th, Casares battled his way past Olympic silver and gold medalists Occhiuzzi and Szilagyi, before confronting Reshetnikov in the final and, ultimately, winning gold 15-9.

In the team event, Spain continued to get a home town bounce as they knocked out top seeded Russia 45-41 in the opening round of the team event. This paved the way for 9th seed Hungary, who seized on the opening by taking down Spain 45-29 and then went on to defeat Germany (45-33) and China (45-31) to win the team gold.