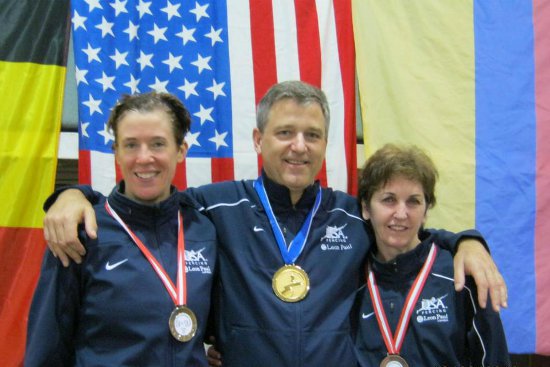 …the status of Veteran events has elevated in [USA Fencing’s] eyes. We bring home a lot of medals and everyone pays their own way, so it’s nice to know that our federation supports us.

Team USA’s 15 medals fell one short of the previous year’s mark.  The United States featured several first-time World Veteran medalists, including Milne, Chaz Smith (silver in Women’s 50-59 Sabre), and Linda Dunn (silver in Women’s 60-69 Sabre).  The USA finished without a medal in any men’s epee event for the first time in four years.  No USA fencer reached the 16 in Men’s 50-59 Epee, owing partly to a strong international field boasting 82 entries, up from 63 at the 2011 championships in Porec, Croatia.

“The US team is clearly one of the strongest teams and one of the more cohesive ones,” said Kate Thomas, who travelled to Krems to coach three-time Veteran World Champion Delia Turner.  Turner took bronze in the Women’s 60-69 Sabre event.  Thomas credited the US team’s  cohesion to the more extensive veteran fencing experience during the US domestic season.  “Most of the other countries have one qualifying event, not three, so they don’t know each other as well as the US fencers do.”

Team USA’s camaraderie was on full display when Susan Hurst, fencing in the Women’s 60-69 Sabre event, arrived at the venue in Krems without luggage after three days of airport layovers across Europe.  With Hurst’s fencing bag missing, the other members of Team USA managed to quickly scrounge enough spare equipment to outfit Hurst, allowing her to compete without buying all new equipment.  Hurst finished 14th in her event.

Many US fencers praised the level of organization support they received from USA fencing.  “I was really happy with everything USA fencing did,” said Milne.  “They communicated well and supported the athletes well.”  Fencers mentioned the work of Courtney Kulick, armorer Brian Rosen, and coach Vladimir Nazlymov.  “[Nazlymov] was in there with every athlete, doing his best to keep us focused, and throwing his whole energy into making sure we succeeded,” said Turner.  “I saw him once run backwards into the flags on the back wall because he was trying to show the fencer opposite him that they needed to retreat.”

Milne likewise cited Nazlymov’s expertise as instrumental to his win.  “He was great.  I wouldn’t have made it out of the 8 without the strip-coaching support.”

Team USA’s fencers represented a wide range of experience and career arcs.  Some, like Men’s 50-59 Sabre fencer Don Anthony and Men’s 50-59 Foilist Ed Kaihatsu, are lifelong fencing athletes with distinguished careers at the senior level.  Kaihatsu began fencing in 1974 and was a first-team NCAA All-American, and fenced on the United States Senior world team from 1985-87.  For him, the Veteran World Championships represented another chance to wear the colors with pride.

“It’s great to be on a USA team again. I really missed it more than I thought,” said Kaihatsu.  “It’s great to represent the USA and compete against other fencers from around the world.”  Kaihatsu was the highest-finishing American in the Men’s 50-59 foil event, taking 6th place, his best finish in the event to date.  “It’s never too late to compete. There’s always something to strive for and I enjoy having that path available to me.”

For Anthony, competing at the highest levels of Veteran fencing is a way to maintain bonds and friendships formed over a lifetime of competing in the sport.  “There are a lot of people you’ve known since you were a young person on the Senior team in your 20s, who are active now as competitors or as administrators,” he said.  Anthony was on the US Senior team in 1989 and 1995, and was 8th this year in Krems.  “Competing and fencing is always something I’ve enjoyed doing … we really are a cradle-to-grave sport.”

Other fencers, such as three-time Turner and 2012 champion Milne, began fencing after 40, partly as a way to spend more time with their children.   Milne began fencing at age 43 with his son, Gary.  “We both started in foil, and it lasted about a month,” Milne said.  “Thirty days of off-targets is what that was.”  Milne found sabre fencing to be a refreshing change from his previous hobby, golf.  “The feedback in fencing is instant,” he said.  “In golf, the feedback loop is squishy.  You can hit a shot that’s perfect and not know why; you can hit a shot that’s terrible and not know why.  When you make a mistake in fencing, you know immediately what you had done wrong.”

Late-starting Veteran athletes such as Turner, Milne, and Dunn represent a new direction for USA Fencing’s growth.  Anthony, who was recently elected President of USA Fencing’s Board of Directors, plans to target their demographic while marketing the sport to a larger segment of the population.  “Veterans are one of those growth opportunities,” he said.  “We have an aging population, a lot of baby boomers who are healthy and looking for a sports social opportunity.”

When asked to reflect on their success, many members of the USA delegation cited an increase in emphasis on Veteran fencing in the United States.  Milne’s coach, Jay Choi, credited both the organization and the fencers themselves for the increase in support.  “In the past five years, USA Fencing has changed,” Choi said.  “Veteran fencers are more active in the community.  Better, more high-level referees are being assigned to Veteran points events.  There is a lot more communication and collaboration in the Vet community, with Facebook and Fencing.net.”

Kaihatsu agreed.  “For the most part, it seems the status of Veteran events has elevated in [USA Fencing’s] eyes.  We bring home a lot of medals and everyone pays their own way, so it’s nice to know that our federation supports us.  Sending an armorer and a coach is really useful, and they were amazing.”

The US fencers made the most of that support, and their success continues to increase the profile of Veteran fencing and redefine the image of Veteran fencing in the United States.  “When vets compete at, say, Nationals or a NAC, or even at local competitions, they’re the funny dudes with the bathrobes,” said Thomas.  “Here [in Krems], however, they are elite athletes.  They wear their country’s colors with pride and go about their jobs seriously.”

To Anthony, the federation’s stance toward Veteran fencing is improving but still has farther to go.  “I think there’s a lot more that we could do.  A trainer could be going with the team.”  He also cited the need to improve the circuit scheduling, noting that a Veteran selection event has been scheduled close on the heels of the Championships in Krems.  “I know my body doesn’t recover that fast any more,” he said.   Of the improvements, “Those things are in the works.  We need to make Veterans a focus and treat our Veteran World Championships team like we treat our other World Championship teams.”

Despite their success, the USA Veterans are not resting on their laurels.  Though Kaihatsu’s 6th place finish marked a career best for him in Men’s 50-59 foil, he fell short of his goal for the season.  “This year I wanted to medal and actually win the event,” he said.  “I also wanted to win all three NACs for Veterans, but I only won two and was third in Anaheim.  Placing sixth was my best result to date at this tournament in Krems, but I feel like I can do more.”

Likewise, Milne feels that despite his championship, he still has more to prove.  A self-described “blue collar,” unconventional fencer, Milne has committed to a more intense training regimen in hopes of repeating as champion.  “Win it once, and they can call you a fluke,” he said.  “Win it twice, and they can’t say that.“