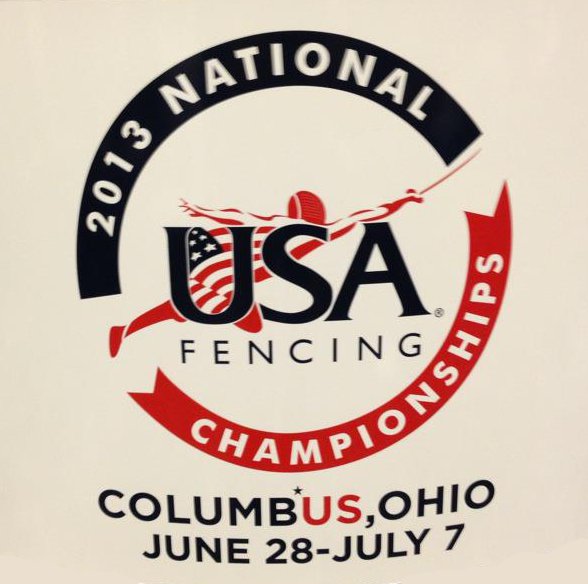 Summer Nationals has been moved to Columbus, OH for 2013

USA Fencing and Columbus city officials announced that Columbus, OH will host the 2013 National USA Fencing Championships.  The event will be Jun. 28 to Jul. 7 at the Greater Columbus Convention Center.

The championship, which is the largest fencing tournament in the world, will host 3,500 participants between the ages of eight and 80 years old.  Officials say the tournament is expected to generate about $5 million in revenue for the city.

This is the second year that USA Fencing has moved the location of that season’s Summer Nationals.  The 2012 Summer Nationals was moved from Dallas, TX to Anaheim, CA during the 2011-2012 season.

“I am thrilled that the Nationals are coming to Columbus. This is a great sports city with a strong fencing community,” said USA Fencing President Don Anthony. “We’ve gotten great support from Mayor Coleman and the Arnold Sports Festival and I’m looking forward to this being an opportunity to showcase our sport to a large audience. Nearly 3,500 athletes compete in this event every year, including future Olympic and World Team hopefuls and I think the local community will enjoy seeing our amazing sport up close.”

“Columbus is excited to have USA Fencing’s National Championships here in 2013 and we are proud of our growing opportunities to welcome USOC National Governing Bodies here,” said Mayor Michael B. Coleman.  “We are a great sports destination and our community looks forward to creating one of the best all-around experiences this event has ever had.”

As the largest fencing tournament of any kind in the world, nearly 3,500 athletes will compete at the USA Fencing National Championships with athletes ranging in age from 9 to more than 80-years-old. With more than 10,000 competitors, family members and fans traveling to Columbus for USA Fencing’s marquee event, the city of Columbus is expected to generate more than $5 million during the 10-day tournament.

“Columbus is thrilled to host USA Fencing’s signature event and welcome some of the greatest fencers in the country to our community next summer,” said Greater Columbus Sports Commission Executive Director Linda Shetina Logan. “We are proud of our strong fencing tradition, our local fencing clubs and the collaboration with the Greater Columbus Convention Center, the new Hilton Columbus Downtown as host hotel and our entire hospitality community, who will roll out the red carpet to USA Fencing participants and fans.”

One of the premier destinations for sports events in the United States, Columbus has hosted more than 50 NCAA Championship events, including three NCAA Fencing Championships during the last five years (2008, 2011 and 2012). In 2013, America’s 15th largest city also will be home to the NHL All-Star Weekend and golf’s The Presidents Cup in 2013.

In addition to the USA Fencing National Championships, several premier Olympic sporting events have been held in Columbus, including the 2008 U.S. Olympic Team Trials for Weightlifting, the 2006 U.S. Olympic Team Trials for Synchronized Swimming, the 2010 and 2012 USA Swimming Grand Prix events and the 2012 USA Volleyball Girls Junior National Championships.

“Columbus is a vibrant sports city that will offer tremendous exposure for our athletes,” said USA Fencing CEO Val Belmonte. “Linda Logan and the staff of the Greater Columbus Sports Commission have been amazing to work with so far and we’re looking forward to partnering on a successful event.”

The event was previously scheduled to be held in Memphis; however, the growth of the National Championships in recent years has meant that the city’s facilities would not be large enough to accommodate the needs of the tournament.

USA Fencing is the recognized National Governing Body for the sport of fencing in the United States. The organization’s mission is to serve and foster the growth, participation and development of domestic fencing at all levels and to achieve sustained international success. USA Fencing is affiliated with the Féderation Internationale d’Escrime (FIE), the international federation for fencing. A 501-c-3 non-profit organization, USA Fencing is based out of Colorado Springs, Colo. and has a membership of more than 20,000 individuals, including grassroots, elite and veteran fencers.

The Greater Columbus Sports Commission (GCSC) was formed in June 2002 to provide leadership, guidance and marketing expertise towards the region being recognized as a premier sports destination in attracting state, regional, national and international sporting events and activities to bolster Greater Columbus economically through visitor spending. In the last decade, the GCSC has bid on and brought more than 225 new sporting events to Columbus that have generated an estimated $250 million in visitor spending, while also working to retain annual bid events that have generated an additional $180 million.