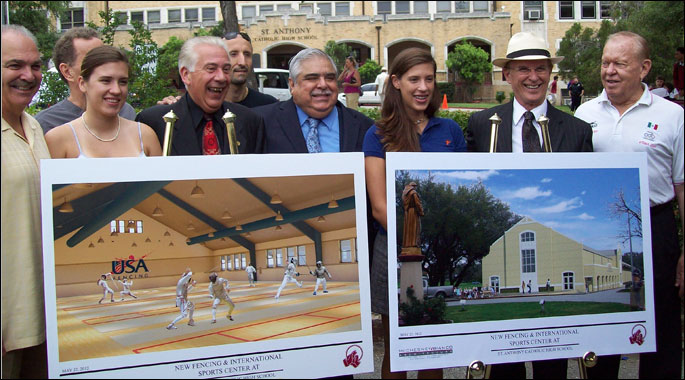 Breaking ground for the sports complex and fencing center at UIW

The University of the Incarnate Word is adding fencing as the 20th sport the school supports – planning that support around the opening of a Fencing and International Sports Center.  Ground was broken for the center in May, 2012 and will open in 2013.

UIW will attain Division I status in July, 2013 for its current roster of sports.

According to a report from the school newspaper:

The 17,000-square-foot fencing and international sports facility will include 12 fencing strips; several practice strips; training rooms; spectator and exercise areas; and an armory. The center will serve as a multipurpose facility allowing UIW to develop an NCAA fencing program; provide facilities for a U.S. Fencing Association club for the community; serve as a training facility for fencing athletes including hosting of regional and national competitions; and support community initiatives such as the Dreams for Youth fencing.

UIW is already contributing to the NCAA scene by hosting the 2013 NCAA Fencing Championships, in conjunction with San Antonio Sports, at the Freeman Coliseum in San Antonio, TX.