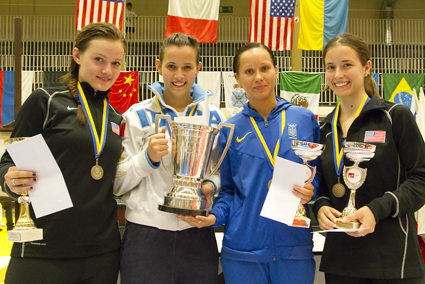 Also making the top-8 was Ibtihaj Muhammad.  Muhammad started the day as the 12th seed and won a close match to Iryna Kravchuk (UKR) 15-14.  She then advanced through the table with victories over Mary Solenne (FRA) 15-11 and Katarzyna Kedziora (POL) 15-13.  In the top-8 Muhammad faced Vecchi and lost the bout 15-13.

Along the way to her top-4 finish, Daria Schneider started the day upsetting the #8 seed Ilaria Bianco (ITA) 15-10.  She then defeated Aleksandra Socha (POL) to make the top-8 where she avenged the Zagunis loss by eliminating Vougiouka.

The women will compete again tomorrow in the team event.